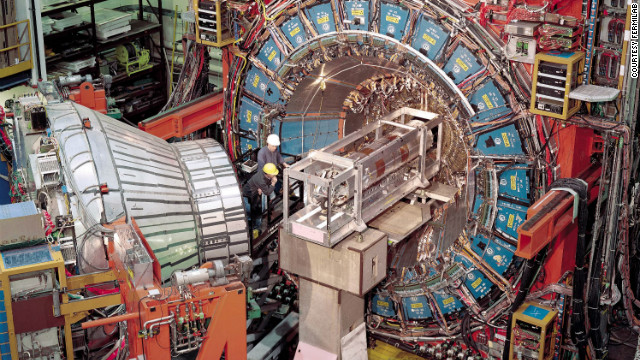 Scientists working on two independent experiments at the Tevatron accelerator in Batavia, Illinois, see patterns in data that might - just might - be indicative of signals from a Higgs boson. If so, that particle would have a mass between 115 to 135 GeV.

"A clearer picture is starting to emerge," said Rob Roser, physicist at Fermilab.

But the results from U.S. collider experiments don't have enough statistical significance to call their data a discovery.

Neither do the analyses that have come out of the Large Hadron Collider, located 328 feet underground beneath the border of France and Switzerland. The LHC announced similar results in December 2011. But the $10 billion machine, which is much more powerful than Tevatron, did not deliver proof of the existence of the Higgs boson, either.

Tevatron, which booted up in 1983, had its final run in September 2011. Scientists are still investigating the dataset gleaned from smashing protons and anti-protons. Anti-protons can be extracted from colliding protons into a target.

Sadly, there's no more data to analyze from the defunct collider, Roser said. But he and colleagues may still be able to improve their analyses enough to have just a bit more certainty about the potential Higgs boson.

"All our good ideas are done already. What’s left are some hard ideas," he said. "Maybe we can improve it [the Higgs analysis] at the 10 to 20% level."

Also on the bright side, the LHC is expected to deliver four times the amount of data in 2012 than it got in the last two years. "That should be enough for it to make a proof-positive statement" about whether there really is or is not a Higgs boson, Roser said.

Scientists announced the development at Rencontres de Moriond, the annual conference on Electroweak Interactions and Unified Theories, in Italy.