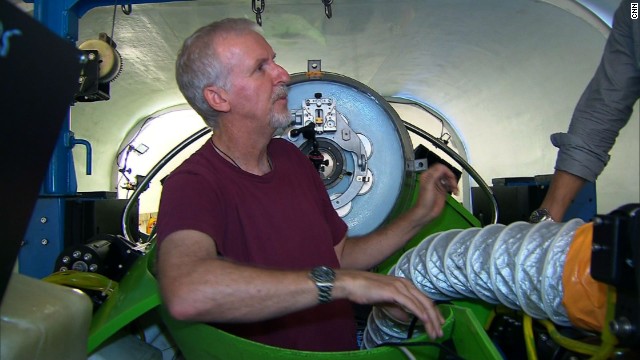 Last week, CNN got rare access inside Cameron’s high-tech single-pilot submersible, the Deepsea Challenger, which was constructed by Cameron and his team of scientists and engineers over the past eight years. Cameron has released little information about the vessel, which was built in Australia.

The director and his team have secretly planned and plotted for five years to send the Deepsea Challenger into the chasm. He has been conducting test dives inside the one-man submersible for several weeks.  In a joint scientific project with the National Geographic Society, scientists and engineers have joined Cameron’s team in this deep sea endeavor.

Overheard on CNN.com: Your thoughts about the expedition

During one of his final test dives for the mission, the filmmaker descended more than 26,000 feet in the Solomon Sea just south of Papua New Guinea.

Outfitted with special cameras and robotic arms, Deepsea Challenger is able to dive vertically at speeds of 500-700 feet per minute and can withstand immense pressure - up to 16,000 pounds per square inch.

When the submersible hatch closes, the temperature inside rises “like a sauna,” said Cameron, who began his descent in shorts and a t-shirt.  Later, he layers up, with the temperatures dropping to freezing the further down he goes.

Being uncomfortable and cramped in a small space for hours is well worth it, he said.

"It’s so exciting - every second you see something cool or you've got something to do or you're photographing or you see some amazing fish,"Cameron told CNN.

At more than 10,900 meters (35,800 feet), the Mariana Trench is deeper than Mount Everest is tall, and has had only two previous human visitors. In 1960, U.S. Navy Lt. Don Walsh and the late Swiss explorer Jacques Piccard descended into the deep in the Bathyscaphe Trieste, a deep submersible vessel. 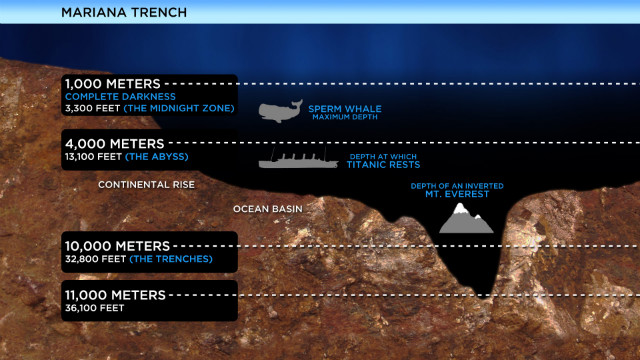 Click here for a look inside the Mariana Trench

Scientists hope that Challenger Deep will provide insight into many unfamiliar life forms in the depths of the ocean.  It is estimated that more than 750,000 marine species have not been formally described in scientific literature over the centuries, triple the number of those that have been. The figures exclude microbes, of which a 2010 marine life census estimates there are up to 1 billion kinds.

It's not the first adventure for Cameron, who has been a lifetime explorer of the sea.  It’s a passion he brought to the screen in 1989 with his undersea adventure, "The Abyss," in which oceanographers find alien life at the unexplored depths of the ocean.   His interest in the sea also influenced the making of his two highest-grossing movies, "Titanic" (1997) and "Avatar" (2009).  In addition to his dive to the Titanic wreck, Cameron's exquisite creatures on the planet Pandora in "Avatar" were inspired by real-life sea creatures seen during his diving ventures.

Last year, Branson announced plans to explore the deepest part of the ocean with his airplane-shaped Virgin Oceanic sub.

"I am planning to go down in the Puerto Rican trench. It goes down further than Everest is high ... about 28,000 feet," Branson said last year. "There have been about 400 people who have been into space but pretty well nobody has been down and explored the big trenches in the oceans."

Lahey, the president of a small central Florida company called Triton Submarines, is also hoping to reach Challenger Deep.  Lahey is described on his company's website as "the most experienced civil sub pilot active in the world today."

The nonprofit X-Prize Foundation has announced it will award a $10 million prize to the first person to reach the bottom of the Mariana Trench.  Cameron told CNN he’s not interested in competing for this prize, or any other, because his mission is purely about scientific research.

“You know, there’s so much we don’t know,” Cameron told CNN. “I’m hopeful that we’ll be able to study the ocean before we destroy it.”