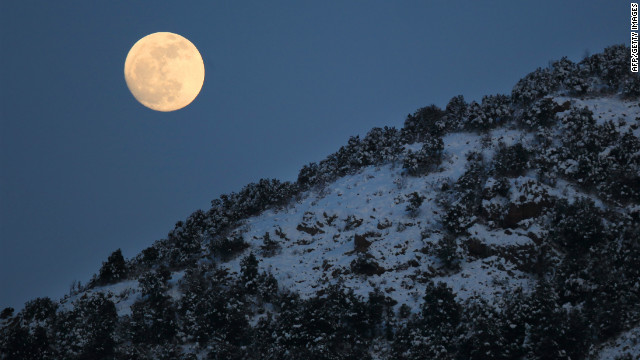 For decades, scientists have scratched their heads trying to pinpoint the origin of the moon's magnetic fields. They quite literally became "moonstruck" with the idea.

Using computer simulations of major lunar impact events, scientists at Harvard University and the Institute of Earth Physics of Paris tested whether an object, such as a giant asteroid, hitting the moon could have created these magnetic fields.

The findings of their study will be released in the journal Science on Friday.

"In this study we tried to show that the force of magnetization on the moon is actually not due to rocks from the moon that are magnetized but rather that they are due to rocks from asteroids that collided with the surface of the moon," Mark Wieczorek, planetary geophysicist and main author of the new study, said in a Science podcast.

"The South Pole-Aitken basin is 2,000 kilometers (1,240 miles) in diameter, roughly half the size of the United States," he said.

Wieczorek said geological mapping indicates the asteroid collided with a surface of the moon at an extremely high velocity (15km per second) and at a 45-degree angle, which explains the shape of the elongated crater.

"What's interesting for us is that meteorite material from these asteroids are very strongly magnetic because they contain lots of iron, 100 times more magnetic than lunar rocks," said Wieczorek.

Though scientists are one step close to understanding where the moon's main magnetic fields emanate from, the actual source of the magnetic fields still remains a mystery.

There are many theories.

Scientists say large impact events were common in the early evolution of the solar system, and these certainly could introduce magnetic materials in the crusts of all terrestrial planets and the moon.

"It's possible this object which smashed into the moon perhaps 4.5 billion years, just after the earth-moon system ... could be representative of the composition of these planetesimals (early celestial bodies) in our inner solar system when our planets were forming," Wieczorek said.

"If we could sample this, it would be really interesting because it would tell us what were the building blocks of the planets when they formed 4.5 billion years ago," he said.