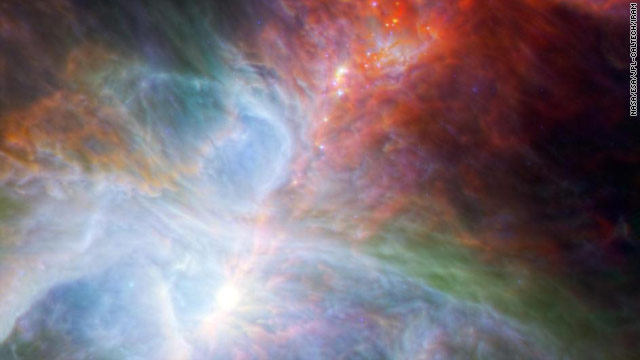 "This new view of the Orion Nebula highlights fledgling stars hidden in the gas and clouds. It shows infrared observations taken by NASA's Spitzer Space Telescope and the European Space Agency's Herschel mission, in which NASA plays an important role.

Stars form as clumps of this gas and dust collapses, creating warm globs of material fed by an encircling disk. These dusty envelopes glow brightest at longer wavelengths, appearing as red dots in this image. In several hundred thousand years, some of the forming stars will accrete enough material to trigger nuclear fusion at their cores and then blaze into stardom.

Spitzer is designed to see shorter infrared wavelengths than Herschel. By combining their observations, astronomers get a more complete picture of star formation. The colors in this image relate to the different wavelengths of light, and to the temperature of material, mostly dust, in this region of Orion. Data from Spitzer show warmer objects in blue, with progressively cooler dust appearing green and red in the Herschel datasets. The more evolved, hotter embryonic stars thus appear in blue.

Infrared data at wavelengths of 8.0 and 24 microns from Spitzer are rendered in blue. Herschel data with wavelengths of 70 and 160 microns are represented in green and red, respectively.