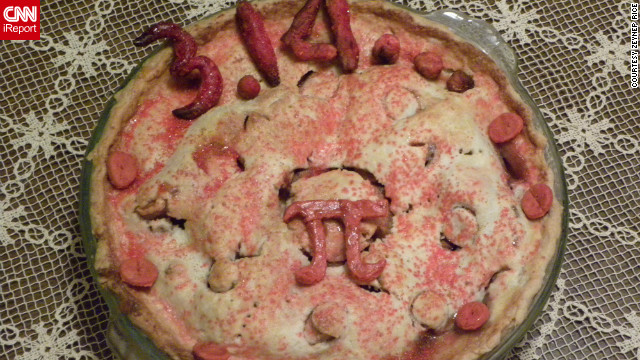 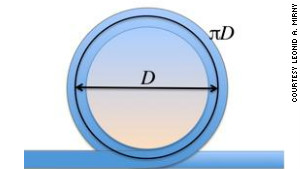 But the digits of pi actually go on forever in a seemingly random fashion, making it a fun challenge for people who like to memorize and recite long strings of numbers (like this iReporter). By the way, the world record for memorization stands at 67,890 digits, according to the Pi World Ranking List. Here are 10,000 digits to get you started.

To the uninitiated, such enthusiasm over a number may sound ridiculous. But when you think about how many different fields of science incorporate pi, it does seem kind of amazing.

Be forewarned: We're going to have to use a bit of math to explain why. Yes, math formulas may seem scary, but trust us: It's worth the challenge.

The search for new planets

For Sara Seager, professor of planetary science at Massachusetts Institute of Technology, pi is part of everyday work in characterizing and searching for planets outside our solar system, called exoplanets.

Here's her basic formula: The volume of a planet is about 4/3 pi times the radius3.

You need this formula to find the density of a planet, which is mass divided by volume. This number that tells Seager and colleagues whether a planet is mostly gaseous like Jupiter, rocky like Earth, or something in between. 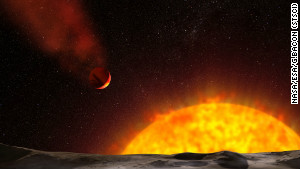 Pi is also involved in calculations regarding an exoplanet's atmosphere, since it can be described spherically, and spheres always involve pi.

And a tiny space telescope that Seager works on called the ExoplanetSat, which is a collaboration between MIT and Draper Laboratory, also incorporates pi in optics equations related to the telescope's mirror. 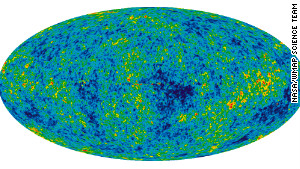 Spergel studies cosmic microwave background radiation, which is basically radiation that's still hanging around from the early universe - it's the afterglow of the Big Bang.

Using a spacecraft called WMAP (Wilkinson Microwave Anisotropy Probe), Spergel and colleagues have been able to get an idea of what the early universe looked like - a "baby picture," as it was called when WMAP's 2003 results were released.

See if you can wrap your head around this:

4pi is the ratio of the surface area of a sphere to the square of its radius, in geometrically flat space.

Why? The positive energy from the universe's expansion (it's been expanding since the Big Bang) is balanced by the negative energy of matter being attracted to itself, via gravity.

Pi comes up a lot in what physicists do at the Large Hadron Collider, the $10 billion machine at the European Organization for Nuclear Research (CERN) in Switzerland that smashes protons into protons at unprecedented energies. Scientists are looking for as-yet-undiscovered particles such as the Higgs boson, which popular culture refers to as "the God particle."

Joe Incandela, spokesman for the collider's Compact Muon Solenoid experiment, explains one way that pi shows up at the LHC:

In particle physics, if we can measure particle properties, like masses, very very precisely, we can sometimes find tell-tale evidence of undiscovered new particles. That’s because particles can transform themselves into other particles, and then come back together to make the original particle again. This is called a loop. 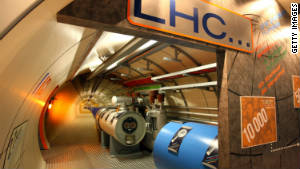 When you calculate the contribution of this process to the particle's mass, a factor of something like 1/(16pi2) comes out, along with other factors that depend on the properties of the particles in the loops.

Interestingly, prior to the LHC, some particles could only appear in these loops, and nowhere else, and should come in pairs in order for a special property that they have to be conserved. A very important example of a theory of particles with this kind of behavior is what scientists call supersymmetry, and it helps explain a lot of the holes in our current best understanding of the universe, known as the Standard Model.

Scientists are hoping to see these kinds of particles directly which requires very high-energy particle accelerators like the LHC to make them. They will also continue to try to detect their effects on Standard-Model particles in these loops, which are extremely short-lived and this requires a lot of patience because measurements must be extremely precise.

So, supersymmetry will probably still be out there for us to discover, even though there is no evidence of it in detailed measurements of particle parameters at the LEP and Tevatron accelerators in the past (or at the LHC either, so far, but there's still a lot of room to look for them).

Pi appears in Einstein's equation for how energy and mass lead to the curvature of spacetime:

Wow, what is that? Sean Carroll at California Institute of Technology acknowledges that this is a weird-looking equation, but the important part is that G is Newton's constant of gravitation. "Long story short: in Newton's equation for gravity, the constant is just G; in Einstein's equation, it's 8pi*G," he says.

You could draw a sphere that completely surrounds the object, and add up the gravitational force at each point on the sphere, to make sure you are correctly capturing what's going on inside. So the answer to one question is related to the answer to the other, by adding up things all over a sphere. And the area of a sphere of radius R is 4pi R2. Voila - pi comes into the expression, because pi relates distances (straight lines) to spheres.

Pi plays an important role in the way the genome is folded, says Leonid Mirny, associate professor at MIT. 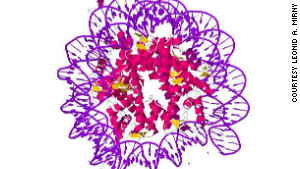 "If you take all DNA of the human genome contained in a single cell and stretch it, the DNA would be a 2-meter-long fiber," he says. How are these two meters of DNA packed inside a cell nucleus, which is only 5 micrometers (that's 5 millionths of a meter) in diameter?

Think about thread around a spool. At the cellular level, there's a core made of special proteins called histones, and they're like the spool. DNA wraps twice around it and then continues to the next spool. Each one of these spools is called a nucleosome, and tens of millions of them pack our DNA, making it look like a string of beads.

How much shorter is this string than the DNA itself? The answer is about 1.5pi (or about 5) times!

Pi is essential for mathematicians whether they care about circles or not, says Jordan Ellenberg, professor of mathematics at the University of Wisconsin. Here's one place where it comes up for Ellenberg: 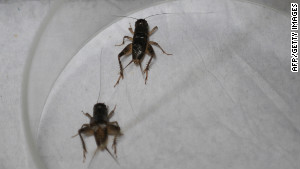 Crickets use sound to locate mates, and their reaction to fellow crickets' calls are of interest to Gerald Pollack - a biologist at McGill University in Montreal, Quebec. In one of his experiments, crickets walk on a spherical treadmill while a loudspeaker broadcasts a cricket song. How accurately do they walk toward the sound?

"We measure the discrepancy between the direction of the loudspeaker and the direction in which the cricket walks, both of which are measured as angles ranging between zero and 2pi radians," he says.

James Clerk Maxwell Maxwell published famous equations of electromagnetism in the 1860s. They are fundamental to modern electronics and communications.

These equations include an important physical quantity called "the permeability of free space," which has a value of 4pi x 10-7 H/m that's units per Henry per meter, where a Henry is a unit used in electronics.

"So we are all using pi every day when we think about magnetic or electric fields, or electromagnetic radiation (light, radio etc)," says Caroline Ross, associate head of the Department of Materials Science and Engineering at MIT.

Pi is involved in calculating the surface area and volume of round three-dimensional objects. So, if you're planning to build something involving spheres or arches or some kind of circular geometry, you're going to need pi!

Chandrajit Bajaj at the University of Texas, Austin, is researching molecular recognition models for drug design and discovery. She uses simulations of particles in which atoms are often represented as spheres. The formulas for molecular surface area and volume involve pi, and often appear in Bajaj's calculations.

So, there are more than 3.14 reasons that pi is special. Now go eat some pie!