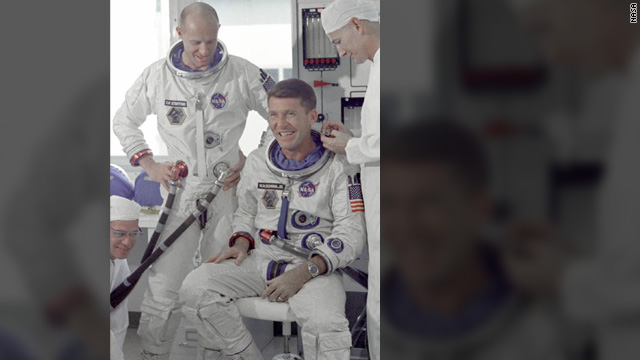 Schirra and Stafford Suit Up

"Gemini VI astronauts Walter Schirra (seated), command pilot, and Thomas Stafford, pilot, go through suiting up exercises in preparation for their forthcoming flight in this image from October 1965. The suit technicians are James Garrepy (left) and Joe Schmitt.

On the third attempt, Gemini VI successfully launched on Dec. 15, 1965. Once in orbit, Schirra and Stafford spent the next six hours catching up to the Gemini VII crew, consisting of commander Frank Borman and pilot James Lovell. Through careful maneuvering, Gemini VI and VII achieved their rendezvous with no relative motion between them. For the next three Earth revolutions, the two craft got as close as 0.30 meters, or about 1 foot apart."