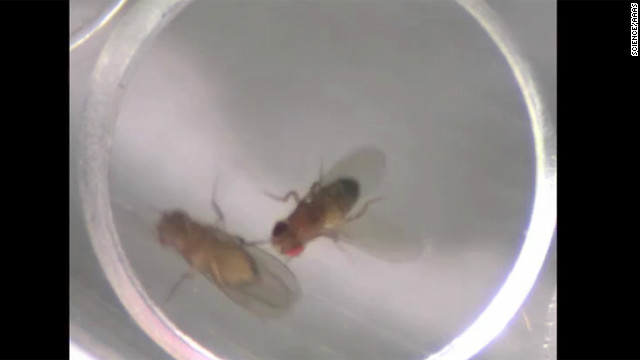 “A reward is a kind of stimulus that reinforces behavior, in that it increases the chance that the behavior will occur again,” Shohat-Ophir told CNN Light Years. “Usually, it’s pleasure-related effects.”

Flies that weren’t deprived of doing the deed had higher levels of a neurotransmitter called NPF, she said, and they consumed less alcohol-spiked food as a result.

The brain’s reward systems are key to reinforcing behavior necessary for survival, including sex. Mating increases NPF levels, but when the flies hit a dry spell, the sex-deprived - and thus NPF-deficient - reward-seekers will turn to alcohol to stimulate a similar cognitive response.

But while Shohat-Ophir and her team weren’t exactly able to persuade their female subjects to put out, they did successfully manipulate the males’ consumption of ethanol-sodden food by directly regulating NPF levels.

“We were interested in trying to get into the molecular mechanisms of what makes social interaction rewarding for animals,” Shohat-Ophir said. “And substance abuse is thought to use the same neuromechanisms as natural rewards.”

In fact, the old soaks weren’t even all that particular about the quality of the food they were eating. Apparently, even the animal kingdom has its junkies.

“Flies exhibit complex addiction-like behaviors, including ... a preference for consuming ethanol-containing food, even if made unpalatable,” the researchers wrote in Science.

Pinpointing the exact reason for the flies’ alcoholic inclinations meant the subjects had to be split up into various control groups. The researchers looked at the effect that group housing had on the flies, for example, or whether there was a preference for virgins over females that had mated before.

But the award for the most unsavory experiment went to the decapitation of female subjects to ensure that males were deprived sexually but not exposed to the social experience of rejection. (Males will court a headless female, but their attempts rarely end in sex.)

These males also demonstrated an “enhanced ethanol preference,” confirming that it is a lack of sex in general, not the stigma of striking out with potential mating partners, that sends them tippling.

And once their confidence has been shattered, it takes a lot to get it back.

“This rejection behavior leads to a memory formation within the brain,” Shohat-Ophir said. “Males that have been rejected have a lower courtship behavior the next time they encounter females.”

But to be fair, the laboratory settings weren’t exactly conducive to lovemaking. Typically, two flies are put into a stuffy, brightly lit space with cameras recording their every move. The male will then attempt to court the female by serenading her with a love song played on his wing, tapping her abdomen and even gently caressing her genitalia with his proboscis, an organ that has smell and taste functions.

Even then, there’s no guarantee a female will consent. That kind of pressure would make any man want to pour himself a drink.