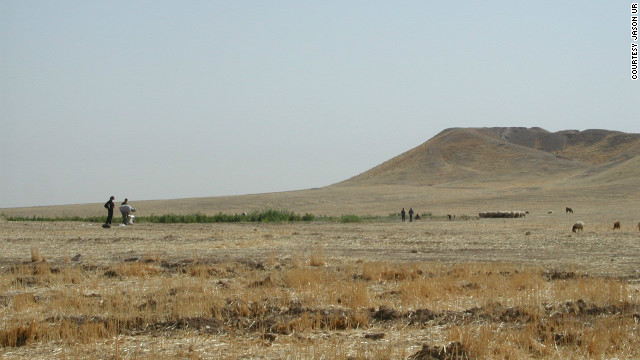 “We found thousands of previously undocumented ancient places, including many small sites that are routinely overlooked by archaeologists,” Ur told CNN Light Years.

To be exact, Ur and Menze used a complex algorithm to detect in satellite images traces of anthrosol, soil that has been modified as a result of humans inhabiting a place for long periods of time. During millennia of human occupation, anthrosols formed from organic waste and the decay of mud-brick architecture. These anthrosols are finer, lighter in color and richer in organic matter than other soil.

In addition to providing a glimpse into the lives of some of the world’s earliest civilizations, the data could help provide the first comprehensive map of human settlements in the area.

Already, the algorithm has allowed them to map more than 14,000 sites spanning 8,000 years of human settlement in northern Mesopotamia, including parts of modern-day Syria and Iraq.

The duo also used digital elevation models - a kind of 3-D representation of a terrain’s surface - to quantify a site’s attractiveness to its inhabitants over the centuries. Factors like proximity to water or the site’s relevance within a regional network played a major role, and because new structures were often simply built atop existing ones as settlements expanded, areas that were more heavily populated have higher elevations due to mounding.

For instance, in some areas of northeastern Syria, small hills exist that are entirely artificial, accumulations from more than six millennia of human occupation resembling bubbles in an otherwise flat landscape.

Ur is optimistic that the findings will persuade policymakers to protect the sites from encroaching modernization, which, as he put it, “takes an inevitable toll on the record of the past.”

The results also demonstrated a preponderance of smaller rural settlements, the kind of agricultural communities that represent the backbone of any society but that are generally ignored by archaeologists who flock to the largest ancient city they can find.

“For every archaeological site we know about, there are 10 or more that remain undocumented,” Ur said. “Our work helps put them back on the map.”