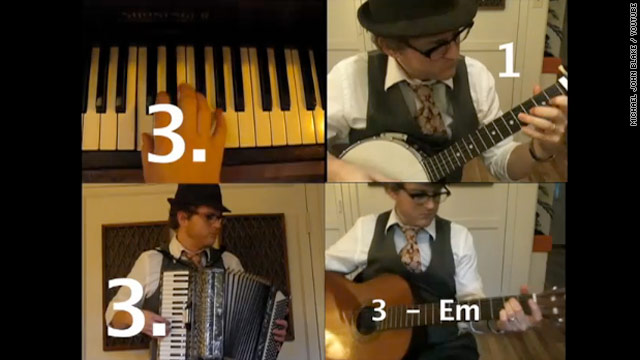 Can you copyright music of pi? Judge says no

Pi Day this year was special for Michael John Blake. On that day, March 14 (3/14, like the number 3.14), a judge dismissed a copyright infringement lawsuit against his song, which is based on the number pi.

And while this sounds preposterously geeky, multiple musicians have seen this as an opportunity to create songs based on these numbers. If you look at a piano and say that the musical note C is 1, D is 2, E is 3, and so on, you can create an interesting melody, and then add other elements to compose a full song with pi as the fundamental musical core.

Blake launched a musical video called "What Pi Sounds Like" based on this idea last year, quickly becoming a YouTube sensation. (The original was removed from YouTube, but New Scientist repackaged it.) But Lars Erickson had already created music based on pi decades before, called "The Pi Symphony." Erickson sued Blake, claiming that he had taken an idea that was already copyrighted.

Erickson also used the digits of pi (as well as the constant e) as the basis for the melody of his "Pi Symphony," which was performed by the Omaha Symphony Orchestra Chamber group and by Ruse Philharmonic of Bulgaria in 2010.

Erickson had alleged that Blake's pi song "sounded substantially similar," and therefore infringes the copyrighted melody that Erickson registered in 1992. He told CNN last year that "nobody can copyright pi," but that he "copyrighted the melody of pi to protect my work, just like anybody would copyright their work."

Judge Michael H. Simon, of the U.S. District Court, District of Oregon, agreed with the plaintiff on the point about the number itself: "Pi is a non-copyrightable fact," Simon wrote in his legal opinion.

Still, Simon continued, "the transcription of pi to music is a non-copyrightable idea. The resulting pattern of notes is an expression that merges with the non-copyrightable idea of putting pi to music: assigning digits to musical notes and playing those notes in the sequence of pi is an idea that can only be expressed in a finite number of ways."

That doesn't mean Erickson's copyright is invalid, "only that Mr. Erickson may not use his copyright to stop others from employing this particular pattern of musical notes," Simon continued. Erickson's work is protected from "virtually identical" copying by others, but Blake's song is not sufficiently similar - for instance, its harmonies, structure and cadence are all different.

Erickson said in an e-mail to CNN on Tuesday that he would simply urge people to watch his video and Blake's video and draw their own conclusions.

"I wrote 'Pi Symphony' 20 years ago, I am thrilled to have presented it first," Erickson said. "It was my gift to the world, no strings attached. Life goes on."

Blake told CNN in an e-mail that he's happy and relieved about the outcome, but not entirely surprised.

"I have felt fairly confident of my legal position from the beginning, but to find out on Pi Day was a perfect end to all of this," he said.