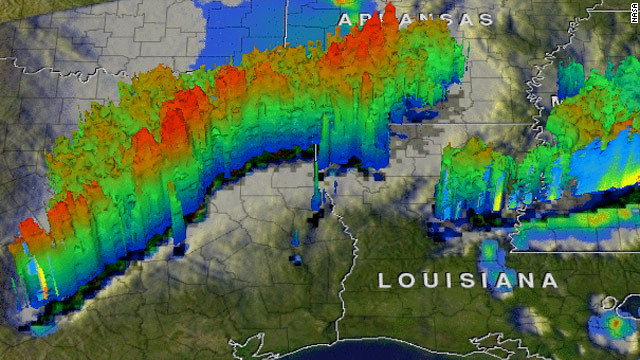 An image from the TRMM weather satellite shows just how incredibly high this week's storms climbed over the region.
April 6th, 2012
03:15 PM ET

Once again, NASA offers us a brilliant perspective of Mother Nature’s fury!

The animation above shows us a 3-D view from NASA’s Tropical Rainfall Measuring Mission (TRMM) Satellite of the storms that hammered the Dallas area and eastern Texas.

Rainfall rates reached up to 2 inches per hour at times during the strongest storms, while those storms also spawned several tornadoes across the region. Some of these twisters were powerful enough to pick up entire big rig trucks.

The stronger the storms are, the taller they are. In an average shower or weak thunderstorm, cloud tops can reach around 30, 000 feet high. When they're more intense, severe cousins develop like those across eastern Texas. Those cloud tops can reach to heights of 50,000 to 60,000 feet, or about 10 miles high!

Tuesday’s storms towered over eastern Texas higher than about 8 miles, or around 42,000 feet. Even the storms that were developing across eastern Louisiana and southern Mississippi reached to heights of around 7 miles.

While we know several of these storms were tornadic as they passed across eastern Texas, these images cannot indicate whether storms are severe, and certainly not if they are producing tornadoes. We still need the traditional radar to see if a storm is rotating or to determine if it is severe. But what we can do is see the intensity of the precipitation underneath those storms and estimate the height of the cloud tops.

This TRMM satellite is part of a joint mission between NASA and the Japanese Space Agency, JAXA. It orbits the globe about 16 times a day - about every 90 minutes. There are three instruments on this satellite, and the most innovative of those allows us to see these storms from a 3-D perspective. It's called the precipitation radar.

TRMM is not just for looking at thunderstorms over land, but it's also a great tool for viewing tropical systems above open oceans.

Researchers do use other satellites to study tropical systems, but TRMM can provide a 3-D view of these storms and offer detailed information on the intensity and structure of precipitation in and around the eyewall, as well as the outer rainbands.

How humans conquered the Earth

How did modern humans take over the planet? It's one of the most intriguing questions in science.

Right now, sitting pretty at the top of the food chain, it's tempting to see our 200,000-year rise to power since the emergence of the first Homo sapiens as a given - as the evolutionary endpoint of a story that got started on the African savannah via two key innovations: bigger brains, and the shift to walking upright.

Yet for our ancestors, things were not so clear-cut. They were not (as we now find ourselves) the only game in town. When the Cro-Magnons (ancestors of modern humans) migrated north from Africa's Rift Valley to settle Europe around 40,000 years ago, the latter continent was already populated by another breed of hominid, the Neanderthals. Within a few thousands years, the Neanderthals were wiped out, and the Cro-Magnon had taken over.