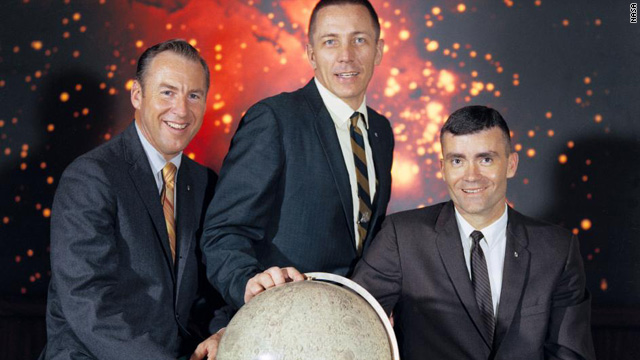 The mission was aborted after the service module oxygen tank ruptured. Still, the mission was classified as a "successful failure" because of the experience gained in rescuing the crew.

As the crew finished a 49-minute TV broadcast showing how comfortably they lived and worked in weightlessness on the evening of April 13, Lovell finished the interview stating, "This is the crew of Apollo 13 wishing everybody there a nice evening, and we're just about ready to close out our inspection of Aquarius and get back for a pleasant evening in Odyssey. Good night."

Nine minutes later, oxygen tank No. 2 blew up, causing the No. 1 tank to also fail. The command module's normal supply of electricity, light and water was lost. The crew was about 200,000 miles from Earth.

After an intensive investigation, the Apollo 13 Accident Review Board identified the cause of the explosion. In 1965, the command mudule had undergone many improvements that included raising the permissible voltage to the heaters in the oxygen tanks from 28 to 65 volts DC. Unfortunately, the thermostatic switches on these heaters weren't modified to suit the change. During one final test on the launch pad, the heaters were on for a long period of time. This subjected the wiring in the vicinity of the heaters to very high temperatures (1,000 degrees F), which were subsequently shown to have severely degraded the Teflon insulation. The thermostatic switches started to open while powered by 65 volts DC and were probably welded shut. Furthermore, other warning signs during testing went unheeded and the tank, damaged from eight hours of overheating, was a potential bomb the next time it was filled with oxygen. That bomb exploded on April 13, 1970 - 200,000 miles from Earth.