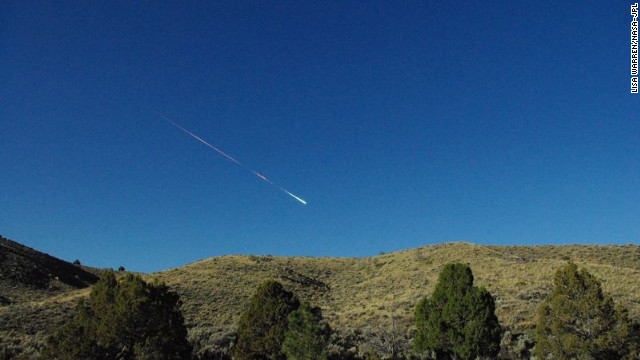 NASA: Meteor over California and Nevada was size of minivan

What would your Honda Odyssey or Dodge Grand Caravan look like falling to the Earth from space?

The picture taken in Reno, Nevada, on Sunday morning shows a meteor the size of a minivan plunging through the Earth's atmosphere, according to Bill Cooke of the Meteoroid Environments Office at NASA's Marshall Space Flight Center in Huntsville, Alabama.

Of course, this would have been one heavy minivan. Cooke said it weighed about 154,300 pounds. Your minivan probably weighs in at about 4,000 pounds.

It was that size and weight that made the fireball visible in the daylight, according to NASA scientists. It was seen from Sacramento, California, in the north to Las Vegas in the south.

"Most meteors you see in the night's sky are the size of tiny stones or even grains of sand and their trail lasts all of a second or two," NASA's Don Yeomans said in a press release. "Fireballs you can see relatively easily in the daytime and are many times that size."

Even then, count yourself lucky if you got to see it, said Yeomans, of NASA's Near-Earth Object Program Office at the Jet Propulsion Laboratory in Pasadena, California.

"An event of this size might happen about once a year," he said. "But most of them occur over the ocean or an uninhabited area, so getting to see one is something special."

The meteor disintegrated before hitting the ground, releasing the energy of a five-kiloton explosion in the process, according to the NASA release.