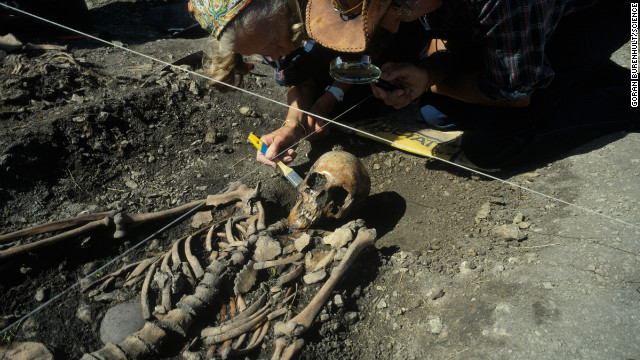 One of the outstanding mysteries of human history is how agriculture spread across Europe, replacing the hunter-gatherer lifestyle. Did farmers migrate, bringing a culture of plant and animal domestication that took over? Or did local hunter-gatherer groups merely adopt ideas about those practices?

A new study in the journal Science provides new insights. Researchers suggest that farmers and hunter-gatherers were genetically distinct groups that intermingled after the migration of the agriculturally savvy people.

"These results are important because they are using ancient DNA, extracted from skeletal remains, rather than sampling living populations and making assumptions about the past," British archaeologist Colin Renfrew, who was not involved in the study, said in an e-mail.

The current thinking is that about 11,000 years ago, humans began the agricultural way of life in the Near East. About 5,000 years later, that culture arrived in continental Europe. Farmers and hunter-gatherers had different dietary habits, funeral rites and expressions of material culture, experts say.

To investigate the impact of the farmers, Swedish researchers examined DNA from four samples of human remains, all approximately 5,000 years old, in Sweden. Three were from a hunter-gatherer site, and one was excavated from an ancient burial site from a farming culture.

Researchers sequenced about 250 million genetic base pairs, which is between 1% and 3% of genomes of each of the four individuals, Mattias Jakobsson of Uppsala University in Uppsala, Sweden, said at a news conference Thursday. The authors of the study compared this genetic information with that of reference materials from many different parts of Europe.

"What we find is that hunter-gatherers are most genetically similar to individuals who today live in the northern ends of Europe," Jakobsson said at the news conference. Specifically, people in Finland, Russia and the Orkney Islands of Scotland have genetic variants in common with the hunter-gatherers these researchers studied.

"In a genetic sense, these two groups live on in a way, although farming is the technique that apparently outlives hunter-gathering in this part of the world," said Anders Götherström, a co-author of the study from Uppsala University.

The ancient farmer was discovered less than 250 miles from the hunter-gatherers but shows these different genetic signatures. This suggests that there were strong genetic divisions between the farmers and hunter-gatherers, which probably existed for 30 to 40 generations, Jakobsson said.

And these divisions would not exist if farming culture had spread only as an idea, the study authors said.

It's likely that the farming practices were brought by people moving from Southern Europe over many generations to Scandinavia, who lived apart from hunter-gatherers. The movement of these people spread farming across the continent. Over time, there was more contact and eventually mixing among these people and the hunter-gatherers.

That's why people who live in Northern Europe today don't look exactly like farmers, or hunter-gatherers, from that time. In fact, it appears that most European populations are genetically somewhere in between the hunter-gatherers and the farmers, according to the study.

Migrations were an important part of the spread of agriculture, but it's important to note that they did not occur in a single advance, said Jan Spora, a study co-author from Stockholm University in Stockholm, Sweden. Movement was probably sporadic and slow.

The hunter-gatherer skeletons show certain adaptations to cold weather, and the lower part of their legs is shorter, proportionally, than the farmer's.

The study adds support to the theory that the first speakers of a language ancestral to the Indo-European languages of Europe today came in with the first farmers, said Renfrew, the British archaeologist.

But the Swedish results are not decisive evidence. It could be that this one ancient farmer skeleton is not typical of all farmers of Europe 5,000 years ago – or, for that matter, that the hunter-gatherers were unusual in their group, too.

"It will need a much larger number of samples, preferably from different sites, to clinch the picture," Renfrew said.