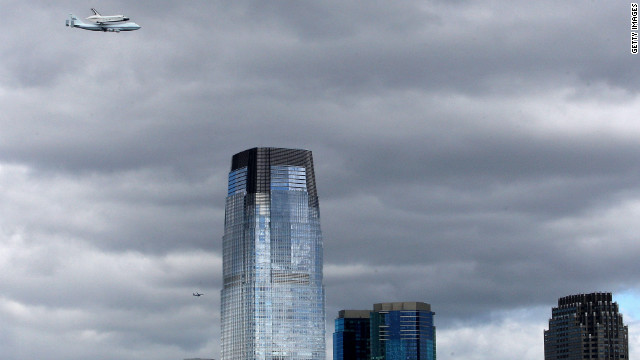 Enterprise swooped across the New York City skyline, mounted atop a 747 jumbo jet.

The shuttle took off from Virginia's Dulles International Airport, with a flight plan that included fly-bys of the Statue of Liberty and other Gotham landmarks. It is ultimately bound for it's new home at the city's Intrepid Sea, Air and Space Museum.

The space agency said it will put the shuttle on a barge in a few weeks and float it up the Hudson River to its final home. 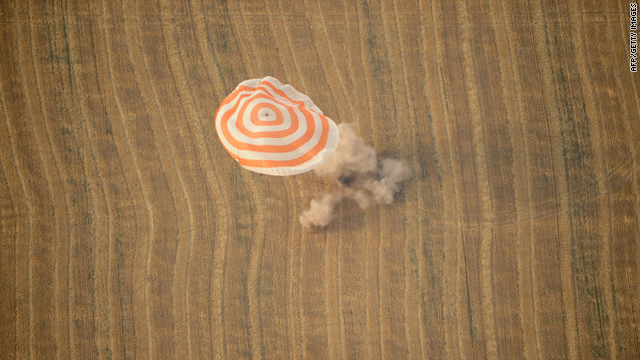 Expedition 30 ran a series of science experiments studying how the human body adapts to weightlessness, and which materials are best for space exploration, among other topics. Expedition 30 also completed a spacewalk and welcomed resupply ships to the ISS.

Onboard station, Expedition 31 officially began with the undocking of the Soyuz craft at 4:18 am EDT. The three men still in flight, Commander Oleg Kononenko and Flight Engineers Don Pettit and Andre Kuipers, will be joined by Flight Engineers Gennady Padalka, Joe Acaba and Sergei Revin in mid-May.

Listen to the podcast above to learn more.

When the Enterprise exhibit opens at the Intrepid Sea, Air and Space Museum in New York, "Star Trek" fans will be among the first people in line to see the historic space shuttle. Trekkies – fans of the television series and movies – share a special bond with the prototype for NASA’s first reusable manned spacecraft. The Enterprise got its name thanks, in part, to their efforts.

The first space shuttle was originally supposed to be called the Constitution. But in 1976, President Gerald Ford received tens of thousands of letters from "Star Trek" fans. The science fiction buffs saw the shuttle as the realization of their dream world. They wanted it renamed Enterprise.

“Suddenly, the stuff we were seeing on television, every week, every night on "Star Trek," was becoming a reality,” Frank Gruber said. His home in suburban Lincoln Park, New Jersey, is a shrine to "Star Trek." Models of the starship Enterprise and other fictional spacecraft from the TV shows and movies hang from the ceiling. The walls are covered with photos of Gruber posing with "Star Trek" cast members.