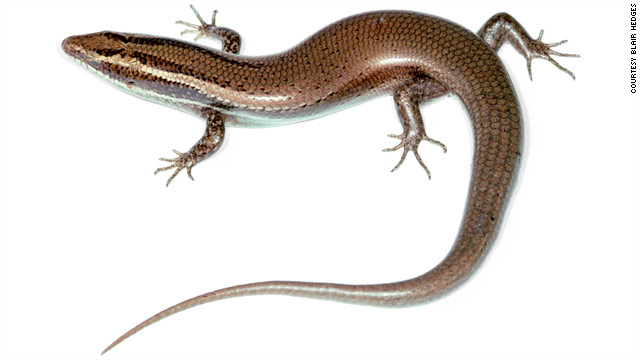 “There are other lizards that give live birth, but only skinks make a placenta and carry their offspring for up to one year,” Hedges said.

The skinks, like those identified in Hedges' study, are believed to have arrived in the Americas about 18 million years ago from Africa, possibly by floating on mats of vegetation, scientists say.

To uncover this hidden diversity of lizards, Hedges and a research colleague had to take one step back in time and re-examine skink samples, preserved in ethanol, some for nearly 200 years.

Close to 800 specimens of these New World skinks, from museums around the world, were closely re-evaluated. The researchers looked at DNA samples and paid particular attention to the physical appearances of the animals, especially the number and shape of their scales before determining their final taxonomy.

“We’re not calling any of these species definitely extinct, mainly because these are pretty big islands and there are plenty of places these skinks can hide under, but we just haven’t seen any in a really long time,” Hedges said.

“The date of the samples we looked at fall right at the end of the decades between 1880 and 1900. This is where we see a big drop-off in their population,” Hedges added.

Research indicates a drastic decline in the skink population occurred at the end of the 19th century. Scientists say human activity is largely to blame, specifically the introduction of a nonnative predator to the Caribbean islands.

“We can correlate this mass extinction of skinks and other reptiles to the introduction of the small Indian mongoose, which was brought to the Caribbean islands by farmers as a biological control for rats in sugar cane fields, which ultimately wrecked havoc on the biodiversity,” Hedges said.

Thirty-eight species endemic to the Caribbean islands are threatened with extinction, according to the International Union for Conservation of Nature's Red List of Threatened Species criteria - the system for classifying species at high risk of global extinction.

The last time more than 20 reptile species were added at one time to the scientific literature was in the 1800s, and about 130 species of reptiles are added to the global species count each year, scientists say.

“Makes me think, what other animals are lurking close by that we haven’t stumbled on to?” Hedges asked.

The research, funded by the National Science Foundation, appears in a 245-page publication in the April 30 issue of the taxonomic journal Zootaxa.