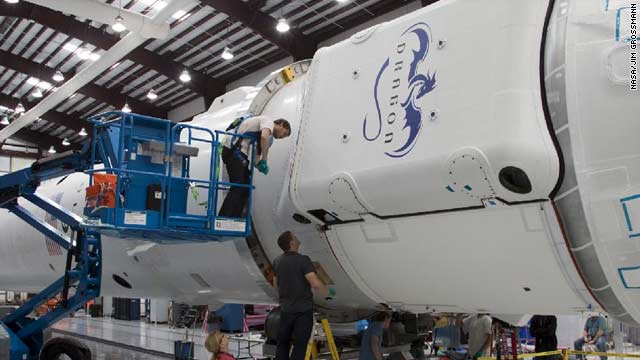 SpaceX and NASA Prepare for May 7 Launch

"In a processing facility at Space Launch Complex-40 on Cape Canaveral Air Force Station in Florida, Space Exploration Technologies technicians attach the Dragon capsule to the second stage of the company’s Falcon 9 rocket. Known as SpaceX, the launch will be the company's second demonstration test flight for NASA's Commercial Orbital Transportation Services program, or COTS. During the flight, the capsule will conduct a series of check-out procedures to test and prove its systems, including rendezvous and berthing with the International Space Station.

If the capsule performs as planned, the NanoRacks-CubeLabs Module-9 experiments and other cargo aboard Dragon will be transferred to the station. The cargo includes food, water and provisions for the station’s Expedition crews, such as clothing, batteries and computer equipment. Under COTS, NASA has partnered with two private companies to provide resupply missions to the station. The launch is scheduled for 9:38 a.m. EDT on May 7. For more information, visit http://www.nasa.gov/spacex.&#034;