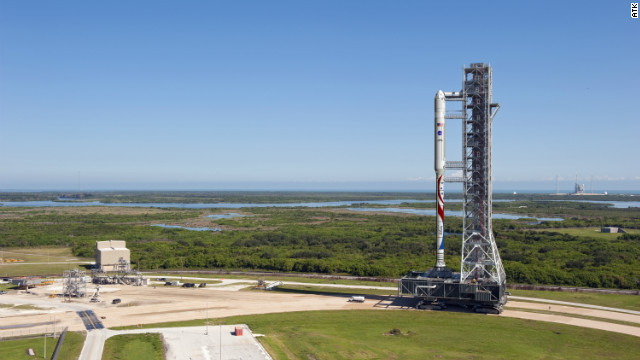 Fourteen months ago, ATK announced it had partnered with the European aerospace company Astrium to build the Liberty rocket, which could carry more than 44,000 pounds into low Earth orbit. But at that point there was no mention of building a crew module. Now, ATK and Astrium are joined by Lockheed Martin to build a complete system from launcher to spacecraft.

Rominger said it became clear pretty quickly that that was the way to go. “By us having control over the entire stack,” he said, “we can best control our own destiny.”

ATK said the Liberty system should be ready for a test flight by 2014 and a crewed flight the next year. The spacecraft is designed to carry up to seven people to the station.

Now, the question for ATK and several other commercial companies is: Which design does NASA choose?

Sierra Nevada Corp. is building a winged spacecraft, kind of a mini-space shuttle, called Dream Chaser. Boeing has the CST 100. SpaceX has the Dragon, and Blue Origin has the New Shepard. All are capsule shaped spacecraft.

By the end of the summer NASA is expected to announce which company or companies will be awarded $300 million to $500 million contracts toward development of crew transportation systems.

NASA Administrator Charles Bolden has maintained he wants at least two in case one should drop out along the way. But some members of Congress say there may not be enough money to do that. Choosing only one would, sources close to the process say, put even more pressure on NASA to make the right choice.

Rominger said, “To me, if you could only choose one person out there, I think we make sense. Our system is designed for humans.”

It’s unclear whether any one company has a leg up. SpaceX has flown a capsule successfully around the Earth. No other commercial company has done that. SpaceX is poised to attempt to rendezvous and berth its unmanned Dragon capsule at the International Space Station. After several delays, the launch is now set for the predawn hours on May 19 from Cape Canaveral.

In a recent interview, SpaceX CEO Elon Musk said, “I’m worried that if the upcoming flight is not successful, there’s some within Congress who will use that to claim that commercial spaceflight should not be funded and that it’s a mistake.”

Musk said he hopes that opinion would not prevail. With the space shuttle retired, the Russian space program and commercial companies are the only options for ferrying astronauts and cargo to the space station.

Musk said if his company is awarded the NASA crew contract, he could fly astronauts to the station by 2016 at a cost of $20 million per seat.  Russia charges NASA about $60 million per rider.

Rominger won’t commit to how much a ride would cost on Liberty or whether he can beat the SpaceX estimate. “Very, very competitive, significantly less than what the Russians are doing,” he said.

With NASA’s decision less than four months away, these companies are going to be scrambling and pressing to convince the space agency and Congress that theirs is the best horse in the race.