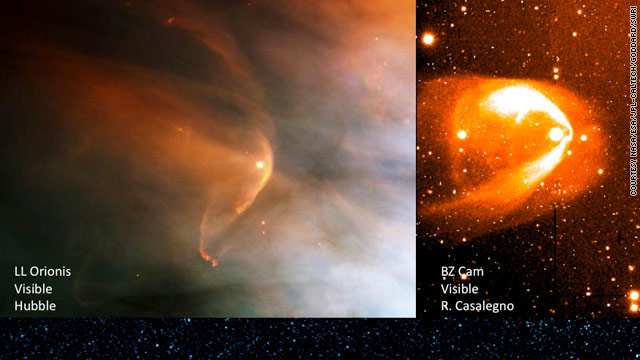 Bow shock is visible in these telescope images of stars. New data shows that our sun likely does not produce bow shock.
May 10th, 2012
02:36 PM ET

No bow shock for our heliosphere

For decades, research into the heliosphere - the bubble of solar-wind-blown particles that surrounds our solar system - has assumed that the heliosphere's motion produces bow shock, a shock wave of ionized gas or plasma preceding the bubble as it moves through space.

You might be familiar with bow shock in terms of the sonic booms caused by planes flying faster than the speed of sound. David McComas, lead investigator for the IBEX mission team that completed this new analysis, explains, "As the jet reaches supersonic speeds, the air ahead of it can’t get out of the way fast enough. Once the aircraft hits the speed of sound, the interaction changes instantaneously, resulting in a shock wave."

Though telescopes have observed bow shock preceding other stars, IBEX has shown that our heliosphere doesn't move fast enough in the galactic gas and dust to produce the same effect. In an article in the online journal Science, the IBEX team reports that the heliosphere moves about 7,000 miles per hour slower than previously thought.

Does this mean the sun itself is moving slower? Compared to the interstellar medium, yes, but compared to the other stars around it, not so much.

Moreover, IBEX and the Voyager spacecraft have both shown that the magnetic field in the interstellar medium is strong enough to require the heliosphere to move even faster in order to produce bow shock.

The new data means that years' worth of research needs to be re-examined, McComas said in a statement. "Already, we know there are likely implications for how galactic cosmic rays propagate around and enter the solar system, which is relevant for human space travel."

Humans traveling outside of the relatively safety of Earth's magnetic field, which deflects some radiation, would be exposed to cosmic rays and risk effects like cancer.