"In the United States, the afternoon sun will become a luminous ring in places such as Medford, Oregon; Chico, California; Reno, Nevada; St. George, Utah; Albuquerque, New Mexico, and Lubbock, Texas," according to NASA.
END_OF_DOCUMENT_TOKEN_TO_BE_REPLACED 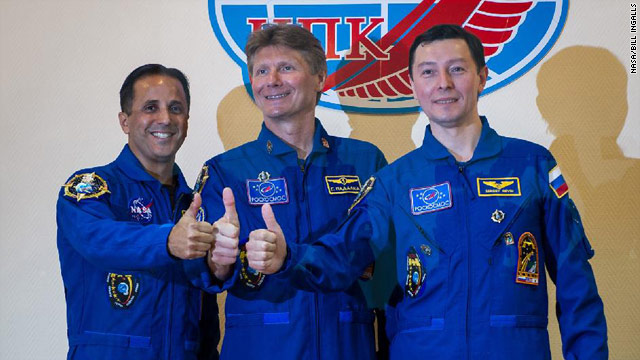 NASA astronaut Joe Acaba and Russian cosmonauts Gennady Padalka and Sergei Revin give the thumbs-up before their launch.
May 15th, 2012
10:52 AM ET

There are three more men in space Tuesday than there were 24 hours ago. Monday night at 11:01 p.m. EDT, the remaining three members of the Expedition 31 crew launched aboard the Soyuz spacecraft and are now on their way to the International Space Station.

Monday night's launch, from Baikonur Cosmodrome in Kazakhstan, was preceded by the usual pre-launch activities:  the crew signed the door of their crew quarters, were blessed by a Russian Orthodox priest, and said goodbye to their families before getting their suits checked and boarding the spacecraft.

Onboard with the three men, acting as this flight's talisman, was a stuffed Smokey Bear. Traditionally, Soyuz crews fly with a small toy hanging from the top of the crew compartment that acts as a gravity indicator: when the toy floats, the crew's in orbit. (Once it was an Angry Bird!)

If you missed it (or if you didn't and just want to see it again), NASA's posted the video of the launch.

The Soyuz will reach the International Space Station and dock on Wednesday at 12:38 am EDT. 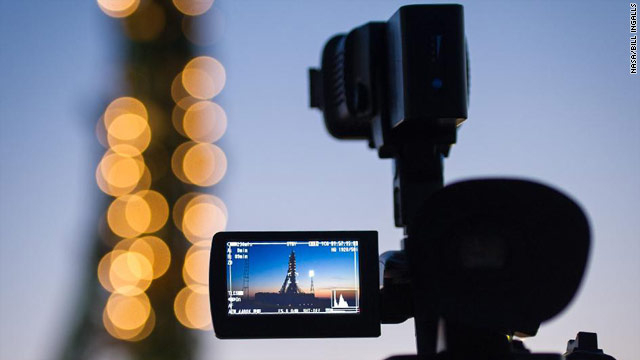 "The Soyuz rocket is seen in the monitor of a video camera moments before Soyuz Commander Gennady Padalka and flight engineers Joseph Acaba and Sergei Revin arrived to board the rocket at the Baikonur Cosmodrome in Kazakhstan for their flight to join their crew mates already aboard the International Space Station. The craft successfully launched at 11:01 p.m. EDT, Monday, May 14, 2012.

The trio will dock to the station’s Poisk Mini-Research Module at 12:38 a.m. Thursday, bringing Expedition 31 to its full six-member complement."