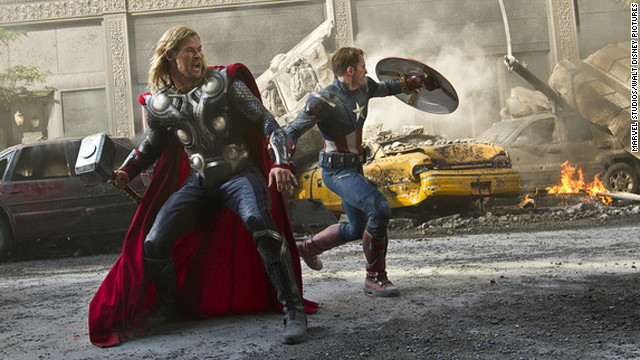 When the Avengers assemble, the world opens its collective wallet.  In just under three weeks since its international opening, "Marvel's The Avengers" has earned more than $1 billion worldwide.  In America, it blew through the $200 million mark over opening weekend alone, and now holds the title of best three-day opening in film history.  Or does it?

While dollar signs fuel the engine of Hollywood movie production, they are not necessarily the most objective measure of a film's success.  Most importantly, the dollar is not a static unit of measurement like the meter; as a result of inflation, a dollar in 2008 has more purchasing power than a dollar in 2012.  If we search for a better way to measure film's opening weekend success, is it possible to dethrone the mighty Avengers?  Let's try to find out.

If we look only at unadjusted gross opening weekend revenue, the top 10 most successful films of all time are as follows, with the amount of money earned in parentheses:

This data, and all data that follows, has been pulled from Box Office Mojo.  Notice that Hollywood’s love affair with the sequel can be explained in large part by this list: of these films, only one, "The Hunger Games," is not a sequel, and even this one is not a new property, but is based on the hugely successful book by the same name.

By this measure, "The Avengers" is the clear front-runner.  However, it is one of only two films on this list to have been released in 2012.  If we adjust these opening-weekend figures to account for inflation, how much does the picture change?

Thankfully, Box Office Mojo has already performed the necessary calculations.  They do this by adjusting a film’s revenue to take into account the average ticket price in the year it was released.  For example, "The Dark Knight" made roughly $158 million in 2008, when average ticket prices were $7.18.  In 2012, the average has increased to $7.92 (see here for a complete list of yearly averages).  This means that if we want a more accurate comparison of this film to The Avengers, we should multiply its opening weekend gross by the ratio of the 2012 average price to the 2008 average price.  This ratio is $7.92/$7.18 or approximately 1.10, meaning that The Dark Knight’s opening gross in 2012 dollars would be closer to $175 million.

By this measure, the top 10 films are as follows (now the amounts are adjusted to 2012 dollars):

Remember, these numbers are estimates, and while they are useful for making more objective comparisons, they should still be taken with a grain of salt.  Even so, a quick look at this list shows it varies slightly from the unadjusted one.  In both cases, however, "The Avengers" is on top.

We have discovered the secret to defeating "The Avengers": Miley Cyrus. While some may be critical of this metric on the grounds that it inflates the averages for films with a relatively small release (the Hannah Montana film opened on only 683 screens, compared to 4,349 for The Avengers), this data still tells us something about the level of anticipation for each of these films.  In particular, the Hannah Montana film probably should have opened on a larger number of screens.

Note that this top 10 list only considers films that earned at least an unadjusted $25 million in their opening weekend.  So there may be more surprises among a larger family of films.

One could also think of more ways to slice the data. For example, "The Avengers" didn’t have the largest opening day ever, but held its ground very well over the weekend, allowing it to eclipse competitors like "Harry Potter."  By digging through the data, one could compare day-by-day performance over opening weekend,and use this metric to rank films.  One could also try to account for changes in population size over time.

No matter how you slice it, though, "Marvel’s The Avengers" is doing exceptionally well.  But as Miley Cyrus has taught us, there is still room for this superhero team to grow.