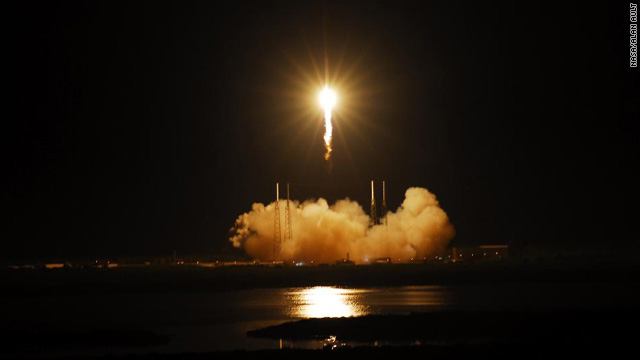 A new era in space exploration dawned Tuesday as a slender rocket powered into the dark Florida sky before sunrise, carrying the first private spacecraft bound for the International Space Station.

"We're now back on the brink of a new future, a future that embraces the innovation the private sector brings to the table," NASA Administrator Charles Bolden said. "The significance of this day cannot be overstated."

The unmanned SpaceX Falcon 9 rocket blasted off from Cape Canaveral, Florida at 3:44 a.m., carrying 1,300 pounds of food, clothing and scientific experiments on a demonstration mission to gauge the company's ability to safely and efficiently deliver supplies to astronauts staffing the orbiting station.

END_OF_DOCUMENT_TOKEN_TO_BE_REPLACED

The company's Falcon 9 rocket - with its Dragon capsule filled with food, supplies and science experiments - is scheduled to blast off at 3:44 a.m. ET from Cape Canaveral, Florida.

The first attempt at launching the rocket was halted Saturday when a flight computer detected "high pressure in the engine 5 combustion chamber," according to the company.

"During rigorous inspections of the engine, SpaceX engineers discovered a faulty check valve on the Merlin engine," the company said in a statement Monday. "The failed valve was replaced on Saturday, and after thorough analysis, the vehicle has been cleared for launch."