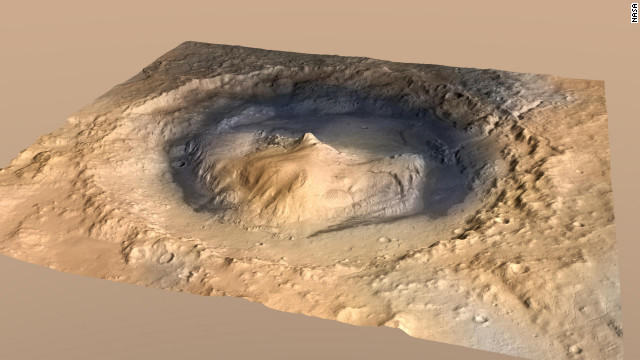 Curiosity, NASA's most advanced rover, will search Gale Crater for evidence of life as we know it on Mars.
June 14th, 2012
09:50 AM ET

Curiosity, NASA's rover bound for Mars, is set to touch down in August. Now, scientists say they know with even more accuracy where it will land.

The summer landing will be the start of a Martian road trip that will take months or possibly a year as Curiosity makes its way toward its final destination, the Gale Crater, said Curiosity contributor James Wray, an assistant professor of Earth and Atmospheric Science at the Georgia Institute of Technology.

"The most important thing perhaps is that we are steering to a different place in Gale Crater, which is a giant mountain of sedimentary rock," Wray said. Unlike Curiosity's predecessors, Opportunity and Spirit,  "We are going with the intention of having to drive a long distance before even getting to what we want to study because the mountain is too steep," Wray said.

However, the new landing destination has been pinpointed with accuracy previously impossible and will shave several months off Curiosity's drive to Gale Crater. Strategically, the new landing site makes sense. But, "the public and scientists will have to be more patient to get the really juicy stuff," Wray said.

The 'juicy stuff' that Curiosity seeks to uncover is evidence of the ability for life as we know it - past or future - on the Martian surface.

Gale Crater was created more than 3 billion years ago when Mars was struck by a meteorite and now houses three miles of sediment, providing the perfect location for such an investigation. Wray said examining Gale Crater will be similar to going through Earth's history by examining the layers of the Grand Canyon and learning, by the thickness and make up of the rocks, if they were once carved by oceans, lakes or air.

"We'll start down at the base, and we'll just climb up as high as we can during the mission and move forward in time in Martian history and see how the environment changed," Wray said.

Gale Crater is ideal, he said because scientists have seen clay minerals and sulfates, both of which which are hydrated, from orbit.

"Basically, you could not have formed at least some of these minerals in some of these stacks of sediments without water," he said. Water is one of the most crucial requirements for life as we know it.

Curiosity is NASA's most advanced rover to date.

And while Wray said the primary objective of the mission is to understand whether ancient Mars once supported life of its own, there are several instruments on the payload that will tell NASA scientists how future astronauts would fare on Martian terrain.

These include a sensor that will measure how much radiation the rover will be exposed to during the mission - a concern for humans since Mars does not have a natural magnetic field like Earth to shield astronauts from harmful cosmic rays.

Other instruments, like Sample Analysis at Mars, which Wray was involved in developing, will get the most detailed analysis of organic matter on the Martian surface available. It will also test the atmosphere for methane, a potentially telling discovery since 98% of methane gas in Earth's atmosphere is created by living bacteria, Wray said. Claims that methane exists in Mars atmosphere are yet unproven.