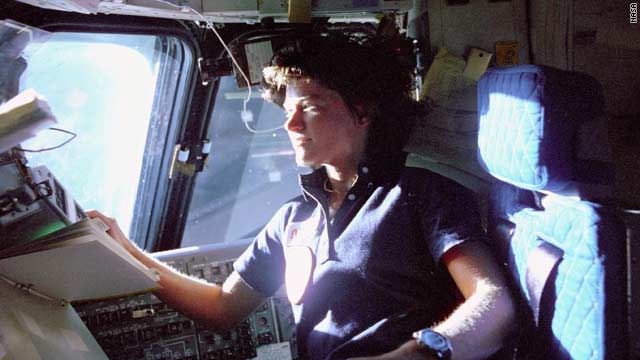 "On June 18, 1983, a young physicist from California took her seat aboard the space shuttle and launched into history. On that date, Sally Ride became the first American woman in space as a mission specialist on STS-7. In this image, Ride monitors control panels from the pilot's chair on the flight deck."

CNN) - China made history Saturday when it launched a spacecraft sending the nation's first female astronaut in space.

Liu, 33, was the deputy head of a flight unit in the nation's air force, according to China's Xinhua news agency.

She is a veteran pilot with 1,680 hours of flying experience, and excelled in space testing after two years of training.

If all goes well, the Shenzhou-9 will dock with China's orbiting space laboratory, making the nation the third after the United States and Russia to complete a manned space docking.

The Shenzhou-9 spacecraft and its carrier rocket as seen Saturday in northwest China's Gansu province.

Participation of women in space will aid training, improve flight crew equipment and expand knowledge on the physical and psychological effects of space on women, said Wu Ping, a spokeswoman for China's manned space program.