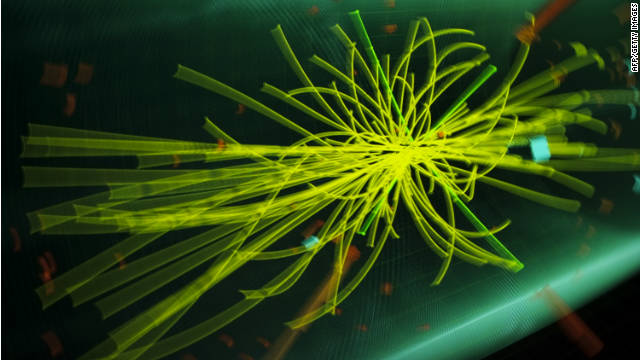 Scientists believe that the Higgs boson is the particle that gives all matter its mass.

Experts know that elementary particles like quarks and electrons are the foundation upon which all matter in the universe is built. They believe the elusive Higgs boson gives the particles mass and fills in one of the key holes in modern physics.

How does the Higgs boson work?

The Higgs boson is part of a theory first proposed by physicist Peter Higgs and others in the 1960s to explain how particles obtain mass.

The theory proposes that a so-called Higgs energy field exists everywhere in the universe. As particles zoom around in this field, they interact with and attract Higgs bosons, which cluster around the particles in varying numbers.

Imagine the universe like a party. Relatively unknown guests at the party can pass quickly through the room unnoticed; more popular guests will attract groups of people (the Higgs bosons) who will then slow their movement through the room.

The speed of particles moving through the Higgs field works much in the same way. Certain particles will attract larger clusters of Higgs bosons - and the more Higgs bosons a particle attracts, the greater its mass will be.

Why is finding the Higgs boson so important?

While finding the Higgs boson won't tell us everything we need to know about how the universe works, it will fill in a huge hole in the Standard Model that has existed for more than 50 years, according to experts.

"The Higgs boson is the last missing piece of our current understanding of the most fundamental nature of the universe," Martin Archer, a physicist at Imperial College in London, told CNN.

"Only now with the LHC [Large Hadron Collider] are we able to really tick that box off and say 'This is how the universe works, or at least we think it does'."

"It's not the be all and end all - but in terms of what can we say practically about the world and how the world is, it actually tells us a lot."

Gordon Kane, director of the Michigan Center for Theoretical Physics, added that finding evidence of the Higgs boson would be a "very wonderful success of science and of people for four centuries."

Why is the Higgs boson called the "God particle?"

The popular nickname for the elusive particle was created for the title of a book by Nobel Prize winning physicist Leon Lederman - reportedly against his will, as Lederman has said he wanted to call it the "Goddamn Particle" because "nobody could find the thing."

"'God particle' is a nickname I don't really like," says Archer. "It's nothing to do with religion - the only (theoretical) similarity is you're seeing something that's a field that's everywhere, in all spaces."

How are scientists searching for the Higgs boson?

For the past year scientists have searched for the Higgs boson by smashing protons together at high energy in the $10 billion Large Hadron Collider (LHC) at CERN in Geneva, Switzerland.

Inside the LHC, which is located 328 feet underground in a 17-mile tunnel and is the most powerful particle accelerator ever built, high speed proton collisions generate a range of even smaller particles that scientists sift through in search of a signal in the data suggesting the existence of the Higgs boson.

"You're just hoping that somewhere in these collisions that you see something ... some sort of a statistical bump," says Archer.

If Higgs bosons exist, they are elusive, popping up and then disappearing again quickly. It means, says Archer, that scientists at the LHC will only be able to observe their decaying remnants.

It has taken years for scientists to narrow down the range of mass in which they believed the Higgs boson could exist - but during the past year a statistical bump suggests they're on the right track.

"Now they're starting to get a bump, the scientists should be able to get that result more and more," says Archer.

What if scientists don't find the Higgs boson?

The general consensus among physics academics is that the Higgs field and boson exists, according to Archer.

"It just makes sense within the framework that we've got everything set up in, given that everything else that we can describe and we can see seems to be described in this simple way," says Archer.

Nearly every scientist believes that the Large Hadron Collider will either prove or disprove the existence of the Higgs boson once and for all - so if the LHC doesn't find it, it doesn't exist, experts say.

Martin Archer believes a failure to find the Higgs boson would be even more exciting than discovering the elusive particle.

"If we don't see it, it actually means that the universe at the most fundamental level is more complicated than we thought," says Archer, "and therefore maybe the way we've been attacking physics isn't right."