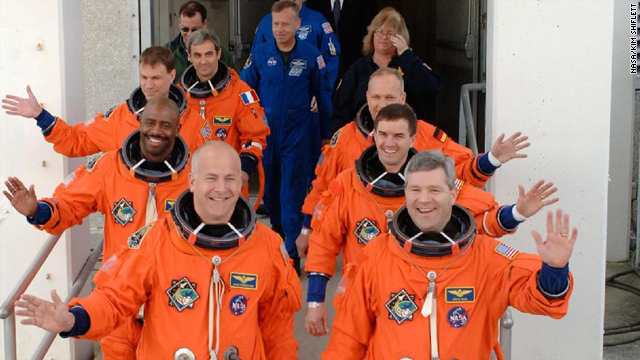 STS-122 Heads to the Pad: A Tribute to Alan Poindexter

"In this image from December 2008, the STS-122 mission crew members stride out of the Operations and Checkout Building, eager to ride to the launch pad and take their seats in space shuttle Atlantis. On the left, front to back, are Alan Poindexter, followed by Leland Melvin, Stanley Love and Leopold Eyharts. On the right, front to back, are Commander Steve Frick, followed by Rex Walheim and Hans Schlegel. Schlegel and Eyharts represent the European Space Agency.

Poindexter died on Sunday, July 1, 2012, while vacationing with his family.

A Navy Captain, he was accepted to the Astronaut Corps in 1998. During his career with NASA, Poindexter commanded the STS-131 space shuttle Discovery mission to the International Space Station in 2010, delivering more than 13,000 pounds of hardware and equipment. He also served as the pilot of the STS-122 mission, which delivered and installed the European Space Agency's Columbus laboratory on the station in 2008. He also served as a spacecraft communicator, or CAPCOM, for multiple missions.

Poindexter retired from NASA in 2010 and returned to serve in the United States Navy as Dean of Students at the Naval Postgraduate School."