Everyone's talking about the Higgs boson, even though there's no really great metaphor for describing what it is and how it works. We know that this particle is responsible for the fact that matter - i.e. the stuff we are made of - has mass. Beyond that, physicists have to get creative.

Scientists from the European Organization of Nuclear Research (CERN) said yesterday that they had discovered a new particle with attributes of the Higgs boson, a particle that had never been detected, but needs to exist in order for current theories about the universe to remain true. 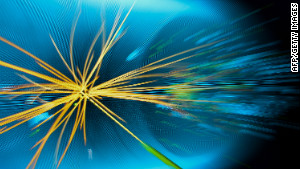 "It's an enormous celebration and everyone's incredibly excited to have found it, but this is by no means a gigantic surprise," said prominent theoretical physicist Nima Arkani-Hamed.

In fact, Arkani-Hamed, who works at the Institute for Advanced Study in Princeton, New Jersey, said he was "dead certain" that the Higgs would be found, and would have staked a year's salary on it.

"It's amazing that something so simple is actually involved," Arkani-Hamed said of the Higgs boson.

For the public, however, it's not such an elegant idea: The theory goes that everything in our universe exists in a Higgs field, which is uniform everywhere. It takes a tremendous amount of energy to excite the field enough to detect a Higgs boson. If Higgs bosons were just free-floating, we wouldn't need a $10 billion collider to detect them, Arkani-Hamed explains.

How can we visualize this?

Imagine we are all immersed in an invisible molasses-like bath, physicist Brian Greene of Columbia University said earlier this year. As electrons move through the bath they experience a resistance, which corresponds to mass. "As far as the Higgs particle itself, it’s actually the tiniest nugget of this molasses-like substance," he said.

Martin Archer, a physicist at Imperial College in London, explains it differently: He compares the phenomenon to Justin Bieber in a crowd of teenage girls. If he tries to move through them, they slow him down, and his speed decreases the more they're attracted to him. "We think we have found these teenage girls," he told CNN Wednesday.

Similarly, if the universe is like a party, people who are relatively unknown will pass through the room quickly, while more popular people are slowed down by their friends, who correspond to Higgs bosons.

OK, so how about detecting the Higgs bosons? Imagine air isn't something that you need to survive, but you want to know if there is air in the room that you are standing in, says Arkani-Hamed. If there's a piano in the room and you can hear someone playing it, there must be air, because sound needs air to travel through. You can think about the Higgs field like the air... or not.

Where did it come from?

It's not as if a particle just showed up and said, "Hi, I'm a Higgs boson; sorry I'm late." More data is needed to determine what exactly the results mean.

Scientists had to look for the particle's signature at the Large Hadron Collider, which operates in a 17-mile tunnel underneath the border between France and Switzerland. This $10 billion machine smashes protons together at unprecedented energies to look for indications of never-before-seen particles and other clues to outstanding mysteries about the universe.

The results announced Wednesday were almost exactly what physicists had believed: The Higgs boson appears to be 125 to 126 times the mass of a proton, and has other properties consistent with the leading theory.

But there are some aspects of these results that don't quite match up to expectations. The number representing the rate at which the particle is produced and decays seems to be one-and-a-half to two times too big. This could very well be a statistical anomaly that will disappear as more results come in at the Large Hadron Collider this year. Or, this could mean that there's about to be a lot of new physics to explain it.

"It certainly adds a lot to the fun right now," Arkani-Hamed said.

Of course, discoveries are always made in a messy way, and the results would have appeared more suspicious if they had been neater, he said.

Physicists speculate that the early universe was extremely hot and not filled with a Higgs field, but the field formed as the universe cooled, changing phases the way that water solidifies into ice. There is no direct evidence of this, however.

As confident as Arkani-Hamed is about the Higgs boson, he's less certain that the Large Hadron Collider's will confirm supersymmetry. This is a theory that Arkani-Hamed works on personally. The basic idea is that every particle has a "super partner" with similar properties in a quantum dimension. It is possible that scientists will see evidence of these extra dimensions at the collider; supersymmetry could even modify aspects of the Higgs boson.

Scientists are also hoping to learn new insights about the early universe, and perhaps even get indicators of dark matter, a mysterious invisible substance thought to be involved in galaxy formation.

The Large Hadron Collider will continue operating until the end of 2012, and then come back online in 2014 after a two-year shut-down with its full energy of 14 TeV.

"The common expectation is that we'd see the Higgs, ... and then we'd also see other physics," he said. "It would be a wonderful, extra surprise if we see new physics in the production of the Higgs."

And here's one analogy that Arkani-Hamed and colleagues hate: the Higgs boson as a "God particle." That name came about because Leon Lederman reportedly wanted to call his book "The Goddamn Particle." But he shortened it to "The God Particle," a term that has become inextricably linked to the Higgs boson.