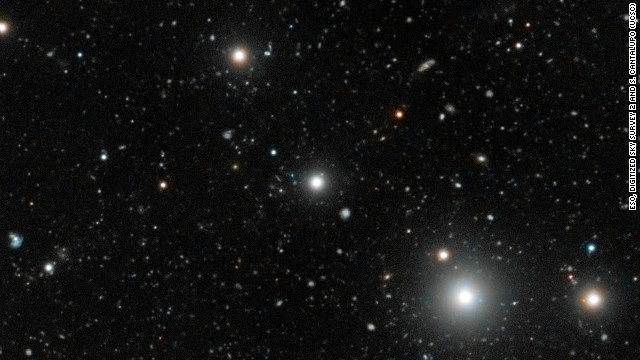 Dark galaxies come to light for the first time

The question of how galaxies form is a hot issue among astronomers. Computer models have helped them make educated guesses about how these groups of stars come to be, but it's been hard to validate these theories.

Now scientists have made a significant stride in confirming part of the story of galaxy formation. They believe they have found several examples of dark galaxies, dense clouds of gas that essentially don't have stars, so they can't be detected with optical telescopes.

"This may be considered the building blocks of galaxies," said Sebastiano Cantalupo, postdoctoral fellow at the University of California, Santa Cruz and lead author of the study. "What we believe is that this is an evolutionary phase into the whole history of galaxies."

Basically, a dark galaxy is the middle stage between a diffuse cloud of gas, and a galaxy as we know them, with a lot of stars.

Since dark galaxies are, by their nature, hard to spot, scientists had to use one of the most powerful kinds of "lamps" in the universe: a quasar, which is a bright galaxy center surrounding a supermassive black hole. This quasar would illuminate dense clouds of gas nearby.

Cantalupo and colleagues used the European Southern Observatory's Very Large Telescope to look for ultraviolet light that would come from hydrogen gas experiencing intense radiation. Because the universe is expanding, the wavelength of light gets stretched, so ultraviolet in the distant universe shifts to a bluish shade of visible light when we observe it from Earth.

The dozen potential dark galaxies they discovered are about 11 billion light-years away from Earth. The universe is about 14 billion years old, and looking into deep space is essentially looking back in time because of the time it takes for light to travel. That means the scientists are observing a part of the universe when it was only 3 billion years old - considered "the early universe."

It's possible that these dark galaxies will just hang out without forming stars, but this is unlikely since they haven't been spotted nearer to us, around our own Milky Way, Cantalupo said.

"Some of these clouds might have been caught on their way to forming small galaxies, other might just be filaments flowing along the cosmic web toward forming galaxies," said Joel Primack, professor of physics and astrophysics at the University of California, Santa Cruz, in an e-mail.

The observations jibe with what simulations had predicted, and allow scientists to look further into the details of these results for new insights.

"Understanding how stars either do or don't form out of gas in the universe is crucial to understanding many of the basic questions of modern cosmology," Primack said.

Related: Earth as you've never seen it before