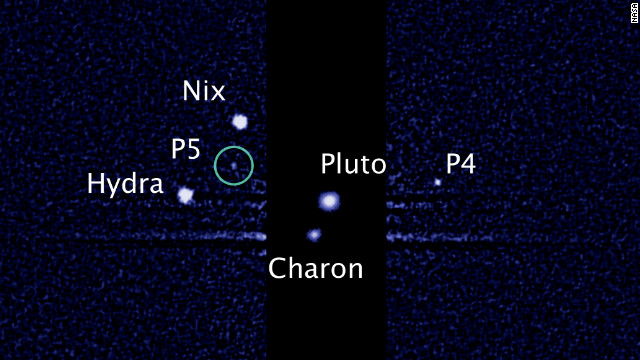 Pluto's other moons are Charon, Nix and Hydra.

The team at SETI Institute is "intrigued" that Pluto, deemed unworthy of planethood in 2006, could have "such a complex collection of satellites," the statement said.

The leading theory is that all the moons are remnants of a collision billions of years ago between Pluto and another large object from the Kuiper Belt - the region of the solar system beyond Neptune.

Because Pluto is so far away from Earth, the images of P5 look like small white dots.

But a NASA spacecraft that is on its way to Pluto will give scientists better images and details about the former planet and its neighbors.

The New Horizons spacecraft was launched in 2006, just months before Pluto was demoted by the International Astronomical Union, and is now about halfway to the icy dwarf planet. It's due to fly past in July 2015.

Hubble is on a scouting mission in support of the spacecraft, and is providing valuable information to guide its flight.

"All of this stuff poses a navigation hazard for New Horizons," said Ray Villard, news director for the Space Telescope Science Institute, which operates Hubble's science mission. "It's a messy place. You have moons and perhaps small particles."

Hubble, launched into orbit in 1990, received new instruments in 2009.

"It's at the peak of its performance," Villard said.

Hubble is expected to remain operational through the end of the decade. The James Webb Space Telescope, slated for launch in 2018, will have a larger mirror and will study Pluto after the New Horizons mission.

"Finding this moon was exciting and shows us Pluto is an intriguing and complicated place," Villard told CNN.