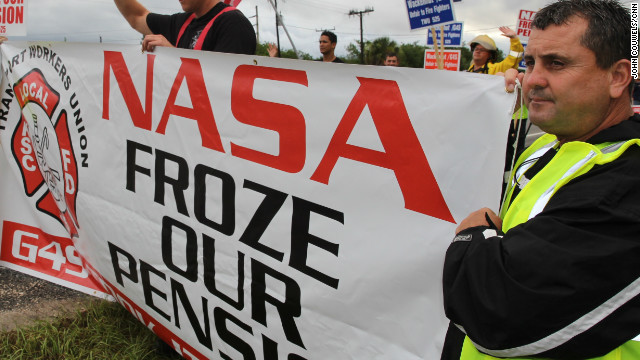 During the first year of its contract, G4S agreed that salaries and benefits would remain unchanged.  But now, fire and rescue workers say the company wants to cut pay by 20% and eliminate the workers' pension plan. NASA spokesman Mike Curie told CNN, "no new employees will be covered under the previous pension plan," going forward. "G4S is attempting to negotiate a 401k plan with the union."

Curie also said that "under the Kennedy protective service contract, workers who are covered under the previous contract  benefit plan are not losing any benefits."

The protest comes more than a year after NASA ended its 30-year space shuttle program and the loss of thousands of related jobs throughout Florida's Space Coast.

“We continue to work toward a successful resolution, recognizing that both the mission and the budget of the Kennedy Space Center has changed drastically in the past year," said Susan Pitcher, executive assistant with G4S Government Solutions, in a written statement to CNN.

Kennedy Space Center and the surrounding aerospace industry is vitally important to Florida's economy, with 86,000 workers and generating more than $4 billion in annual revenue, according to Florida Lt. Gov. Jennifer Carroll.

Union president Smith said NASA should have known G4S would have not been able to provide the same level of service without the work force making huge concessions.

Emergency services at the space center won’t be interrupted during the protests, workers said.  G4S provides security, firefighting and emergency services at several NASA sites, such as the Jet Propulsion Laboratory , NASA Ames Research Center in California's Silicon Valley and Houston's Johnson Space Center, said Pitcher.  Each facility has a separate contract, and none is related to the agreement at Kennedy Space Center.