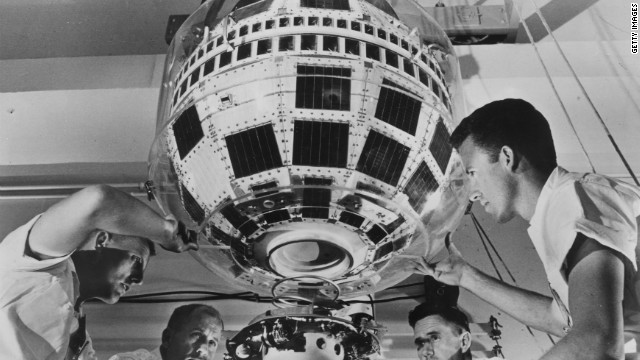 Thursday’s event at the Air and Space Museum linked speakers at the Museum through satellite in Washington to other symposium participants at that same telecom facility in Brittany used 50 years ago.

At the symposium, Smithsonian Secretary Wayne Clough told listeners in Washington and across the Atlantic just how important the launching of Telstar was to our lives today.

The satellite’s launch even inspired an instrumental song by an instrumental group known as The Tornados. ‘Telstar’ was the first single by a British band to reach number one on the U.S. Billboard Hot 100 and was also a number one song in the UK.

“It was a sense of relief,” said Paul Ceruzzi, chairman of the National Air and Space Museum's Space History Division. “Americans were depressed about news from Russia. The implication was, ‘If Russia could put these things into space, then maybe they could shoot missiles at us.’ This is something we won.”

It was an American victory in a game in which the Soviets could never catch back up, as U.S. astronaut Neil Armstrong became the first human to walk on the moon in July 1969.

The satellite handled over 400 telephone, telegraph, facsimile and television transmissions in its short lifespan. Telstar is still orbiting Earth today but stopped functioning in November 1962, when the satellite failed due to the effects of radiation.