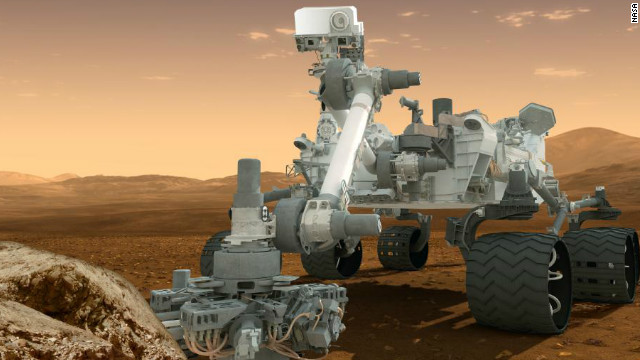 Mission managers say Curiosity's trip to Mars has been “outstanding,” but the landing will be the hardest ever attempted, according to John Grunsfeld, associate administrator for the Science Mission Directorate at NASA headquarters in Washington.

“This is risky business,” he said at media briefing on Monday.

The rover’s size - it's 9 feet, 10 inches long and 9 feet, 1 inch wide - makes it too heavy to land with airbags like earlier rovers. Instead, NASA will use what it calls the “sky crane touchdown system.” The landing is so complicated, NASA made a video about it called “Curiosity’s Seven Minutes of Terror.”

A parachute will slow the rover as it plummets toward the Martian surface, and then a rocket backpack will slow it even more and guide it to the landing site. The “sky crane” deploys, leaving the rover hanging by nylon cords just above the ground. After the rover’s wheels touch down, the cords are cut and the rocket backpack speeds away and crashes.

"Is it crazy?" asked Mars Exploration Program Manager Doug McCuistion. No, not if you understand it, he said.

"Landing on Mars is always risky," McCuistion said. The rover will go from 13,000 mph to zero in seven minutes and there are hundreds of things that can go wrong, he said.

"Mars throws things at you. Dust storms, atmospheric density changes, wind," he said. "It's a very unique and a very challenging environment."

He likened the landing to a game of dominoes. If one one of them is out of place, McCuistion said, it's likely the last domino won't fall and the rover may "hit the ground harder than we want it too."

So, is the rover landing crazy? You decide. Here are the key moments in the landing:

The rover, packed into its travel case (cruise stage), along with its protective back shell, a rocket backpack, heat shield and parachute, arrives at Mars on August 6 traveling at a zippy 13,200 mph (5,900 meters per second).

Ten minutes before it enters Mars’ atmosphere, the rover’s cruise stage will be jettisoned. A minute later, small rockets on Curiosity’s protective back shell fire to stop the spacecraft from spinning (the spinning helped stabilize the craft during its trip from Earth, but the motion is no longer needed). The spacecraft will rotate so that its heat shield faces forward to protect it from the fiery heat of entry. Two tungsten weights - each weighing about 165 pounds (75 kilograms) – are ejected. This will help shift the mass of the spacecraft and generate lift.

The spacecraft then will fly in a series of “S” curves to keep it on course. The spacecraft’s computer controls this motion – NASA calls it “guided entry.” The exact amount of time until touchdown will be determined by how much maneuvering the spacecraft has to make. NASA says it will take between six and seven minutes.

After the spacecraft finishes “S” curves, it drops more weights.

Then the nail-biter part begins:

-7 miles up (11 kilometers) - a giant parachute is deployed to slow the spacecraft.

-5 miles up (8 kilometers) - the heat shield is jettisoned. An onboard camera (Mars Descent Imager) begins recording video of the ground.

-66 feet up (20 meters) and about 12 seconds before touchdown - nylon cords lower the rover from the rocket backpack in the “sky crane” maneuver. The rover’s wheels and suspension system double as the landing gear.

After touchdown, the nylon cords are cut and the rocket backpack flies away to crash down a safe distance from the rover.

Curiosity will be "ready to rove" upon landing and its computer begins activities on the first day at Gale Crater.