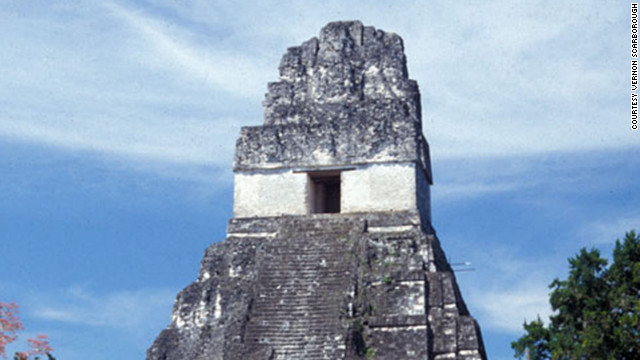 With time, though, the Mayans were forced to accommodate the growing population by paving the land and building more housing, covering up the limestone.

“When you do that, you cut down the potential for recharging the springs,” said Scarborough, a professor of anthropology at the University of Cincinnati, “but any rain that falls on that surface can now be moved into a reservoir.”

The Mayans were able to construct an extensive water system, replete with channels, tanks to store water collected during the wet months, dams to gradually ration water during dry months, sluice gates to better control water distribution and switching stations that controlled the directional flow of water. But their new system presented them with new problems.

With humans and drinking water crossing paths on the surface, the water was at great risk of contamination, Scarborough said.

By mapping the topography of the surface, creating trenches near the waterways and taking cores (undisturbed cylindrical strata samples of the sediment), the researchers were able to identify where sediments came from, and how old they were. Researchers were also able to confirm the past research and, more importantly, extrapolate that the Mayans didn’t just transport water - they made it better.

Examination of the sediment cores revealed numerous layers of quartz sand. The researchers, who knew that natural quartz sand wasn’t a regular feature of the Tikal region, realized that the Mayans had most likely imported the sand to direct and filter runoff, making even surface water safe for consumption. Researchers know there was a silting tank (a sand filter) at the Temple Reservoir, and concluded they were likely at the other reservoirs also.

“You’ve got to have a clean water source, and we have one scenario now,” Scarborough said. “But be mindful, it’s not going to filter out everything.” Based on his knowledge of similar societies in Egypt and, most recently, Cambodia, Scarborough believes that the filtration process was occasionally augmented by boiling water or simply drinking fermented (and thus cleansed) liquids.

“It wouldn’t take a stretch intellectually that that’s what they were doing in the past in a place like Tikal,” Scarborough said. “The question is, to what degree.”

The real question, though, is whether these revelations about the past could have a measure of influence in the present or future.

“People say that history repeats itself, but we need hard facts to say that that’s the case. But I think our study could give us a window into that,” he said.

Scarborough, whose main research interest is the comparison of water systems between contemporary societies, believes it is important to determine whether societies without contact develop similar water systems.

“When you have different parts of the world with different histories that came to the same conclusion, you come closer to explaining certain kinds of behavior. And that leads to questions about answering sustainability,” he said. “What kinds of lessons can help us in the future project how people will adapt to certain environments? That’s where archaeology’s most helpful.”

In order to do that, though, researchers will have to conduct experiments exploring the accuracy of their interpretations of ancient water systems – and he wants to be a part of the process.

"I think we have the outline of how they did it,” Scarborough said of how the waterways were built. “We have a blueprint – but it would be advisable to tighten it up, to see if there are any nuances that we’re missing and test what we think we’ve learned. You want to be as careful as possible if you’re going to take a model and apply it somewhere else.”

Even if the systems do work, though, Scarborough said that not everyone will want it.

“You can’t just take a technology and throw it on some group and hope it works. Can this system, with present day society, be accepted? The question isn’t only about the functionality, if it works or not, but also whether or not it’s going to be received politically and ideologically by another group,” Scarborough said.

But Scarborough thinks further research is worth it.

“Humans have a short-term view of their future, and this is an opportunity to look at what we’re really facing.”