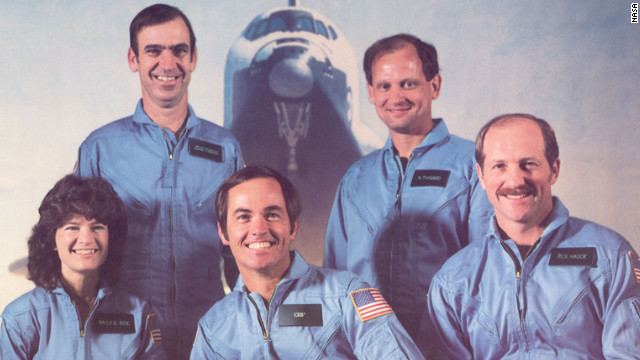 I was fortunate enough to be one of the 15 pilots among the TFNG (Thirty-Five New Guys) and was privileged to fly aboard Challenger in June 1983, on the seventh mission of the space shuttle.

STS-7 was commanded by Bob Crippen, with Sally, John Fabian, Norm Thagard and me making up the rest of the crew. It was to be a technically challenging mission, but the hallmark of the flight was that Sally would be the first American woman to go into space.

From the moment the crew for that mission was announced Sally was the news. Training for a space mission takes an extraordinary amount of time, with few opportunities left for real relaxation, and the clamor from the press for interviews with Sally was unabated, placing even more demands on her time.

Some of the coverage was laughable. During one pre-flight press conference Sally was asked: "Do you think you will cry during the flight?" She always exhibited grace under pressure. She responded humorously: "Why doesn't Rick get asked that question?"

Sally immersed herself in the mission training regimen and always brought a sense of good humor to the office and the simulator. In addition to mastering the complexities of operating the Canadian-built robot arm, she sat "third seat" as the flight engineer for the launch and the landing flight simulations.

Instructors would inject near-fatal anomalies into the shuttle's systems. It was Sally's job to keep Crip and me in the right sequence of procedures, so that we could cope with the crises and live to fly another day. She was superb.

On June 18, 1983, the launch went flawlessly. Eight and a half minutes later we were ushered in to the magical world of zero gravity - floating joyfully within the confines of our little cabin.

Houston called Sally and asked how the trip up was. She replied that it was "an E-ticket" ride - the best, in the parlance of nearby Disney World. Several months later Mickey Mouse visited the Kennedy Space Center, where he presented each of us with a Mickey Mouse watch.

A few months after the mission, NASA and the State Department decided that it would be good for the country to have Sally make a goodwill tour of Europe, and that it would be helpful to have one of her crew mates along to help run interference should the press of the press get too great. Crip was in training for his next flight, so I was the lucky one to join her.

We were scheduled to visit eight countries, to meet kings and queens and prime ministers, visit research facilities - and to give innumerable presentations and interviews. The schedule was exhausting. Sally carried it off beautifully, as we experienced the mayhem of the Italian paparazzi, and the graciousness of Queen Beatrix of the Netherlands and King Olav of Norway.

Our itinerary included an appearance at the International Astronautical Federation conference in Budapest, Hungary. Russian cosmonauts were expected to be there and we were urged by our handlers not to mingle with or be photographed enjoying drinks with them, as US-USSR relations were strained due to the recent shooting down of Korean Airlines Flight 007.

That evening Sally whispered to me that she had been invited to a private meeting with Svetlana Savitskya, the second Soviet woman to fly into space. I urged her to take this unique opportunity, even though it probably violated some of our guidelines.

After the awful explosion of the Challenger in January 1986, both Sally and I were given temporary assignments in Washington, with Sally joining the Presidential Commission investigating the tragedy. Her leadership qualities were tapped as she was also made chair of NASA's first strategic planning effort, which write a report entitled "Leadership and America's Future in Space."

After leaving NASA, Sally pursued her passion of encouraging young women to pursue studies and careers in the so-called STEM (science, technology, engineering, mathematics) fields. We crossed paths several times in later years, at mission or TFNG reunions. She was always the same: upbeat, focused, well-informed, fun to be around. She even graciously gave my granddaughter an interview for her middle school English paper - about her hero.

With her passing at such a young age we have lost an extraordinary person - a true American hero - and a respected friend.

The opinions expressed in this commentary are solely those of Frederick Hauck.