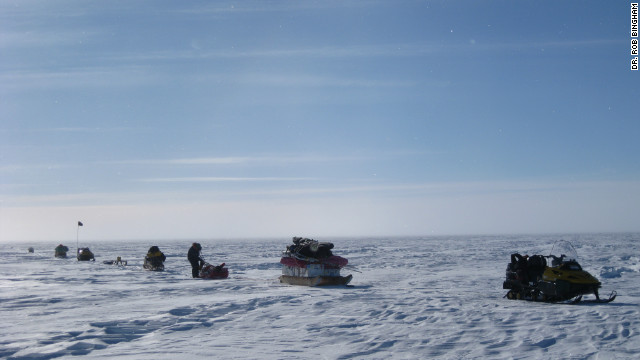 Ice-penetrating radar was towed across the Antarctic ice sheet to reveal the massive valley below.
July 26th, 2012
01:47 PM ET

British researchers say they've discovered a massive rift valley beneath the Antarctic ice sheet that rivals the Grand Canyon in depth and is contributing to ice loss on the continent.

“If you stripped away all of the ice here today, you’d see a feature every bit as dramatic as the huge rift valleys you see in Africa and in size as significant as the Grand Canyon," the lead researcher, Robert Bingham, a glaciologist at the University of Aberdeen, said in a press release.

“What this study shows is that this ancient rift basin, and the others discovered under the ice that connect to the warming ocean, can influence contemporary ice flow and may exacerbate ice losses by steering coastal changes further inland,” Ferraccioli said.

The work of the researchers was reported this week in the journal Nature.

The valley is in West Antarctica, which is losing ice faster than other parts of the continent, the researchers say.

The researchers came across the valley, which lies below the Ferrigno Ice Stream, in 2010 during three months of fieldwork on Antarctic ice loss. The area had not been explored in five decades.

“For some of the glaciers, including Ferrigno Ice Stream, the losses are especially pronounced, and, to understand why, we needed to acquire data about conditions beneath the ice surface,” Bingham said in the University of Aberdeen release.

The team used ice-penetrating radar over a 1,500-mile flat stretch of ice sheet, an effort that revealed the massive valley.

“What we found is that lying beneath the ice there is a large valley, parts of which are approximately a mile deeper than the surrounding landscape," Bingham said.

In comparison, the Grand Canyon falls off 7,000 feet, or 2,100 meters, at its south rim in Arizona, according to the National Park Service.