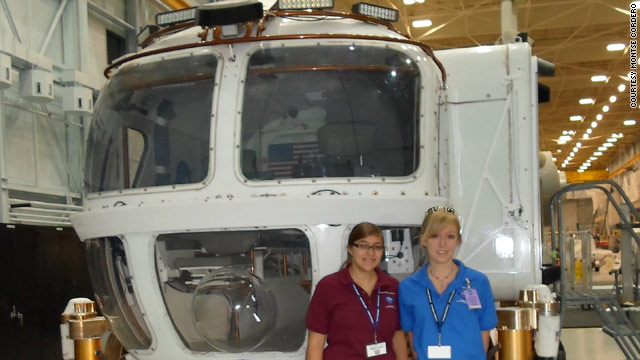 Editor's note: Montse Cordero is a 17-year-old student from Costa Rica participating in the Foundation for International Space Education's United Space School, a two-week summer program in Houston. She'll be blogging about her experiences in the program here. Need to catch up? Check out her first post: Getting ready to explore space school, and her log of the first two days.

I’ve been a space geek for a pretty long time, so being at space school is like a dream come true. I’ve wanted to learn everything related to space since I was a little girl. Influence from my parents and going to Space Camp, along with a few other factors, got me to where I am now, but I never imagined I’d get to do things like the ones I’ve been doing these days. The most amazing part is that it’s only day two!

Today started early at Johnson Space Center, where we visited their acoustics laboratory. The laboratory is where they test spaceships and their components before they fly to make sure the vibrations from the launch won't damage them. From there we went to the University of Houston, Clear Lake where our classes take place. It was pretty exciting; we knew we were getting our team assignments.

Before finding out which team we belong to, we had a talk from the admissions department of UHCL. Then we were finally told what team we were on and who our teammates were. I got my first choice, the Maroon Team. There are eight people on the team: two Chileans, two Canadians, two Welsh, an Irish and me. I’m sure it will be plenty of fun to work with them and learn about their cultures.

The Maroon Team will handle everything that has to do with taking mission components from Earth to low-Earth orbit. When we finally got to mission work, we debated and decided our mission parameters. We decided we were going to Mars on an exploration mission for more than 90 days, with five to nine astronauts, etc. These sound like easy decisions to make, but we actually had to discuss a lot.

The toughest decision was probably choosing between an exploration and a colonization mission. At first most of the group thought exploration was the best idea, but once both sides started giving arguments we split pretty much in half. Should we take the risk and just establish a settlement, or should we go on an exploratory mission first to see how humans do? After tons of really good arguments and a split vote, we chose to go and explore first. The other parameters were chosen similarly.

Tonight we had a soccer match: United Space School students vs. the NASA All Stars team. It was a pretty intense match, but in the end the best team (obviously, I’m talking about the students) won, 5-4. As soon as the match was over, Alex and I left, but for a good reason - we were taken flying! Our host has a four-seat plane; it’s small but really fun to fly in. We got to see downtown Houston from the air at night, which is a truly amazing view. We even got to “take control” of the airplane for little bits of time, which was awesome.

Today was absolutely fantastic! It was also proof that Alex and I lucked out, and that we have the most amazing host family. Thanks to our host, Jeevan, our day started at Johnson Space Center's Building 9, also known as the Space Vehicle Mockup Facility. It's where they keep robots, mockups of spaceships and all sorts of cool things. We knew this was a pretty big privilege, but we didn’t know how big until later in the day.

The school had a field trip planned to Space Center Houston. We got to see the visitor’s complex, and we also took a tram tour. It took us to the rocket park where we saw the astounding Saturn V, the Apollo-era mission control center, and where the astronauts train. We knew that for this last one, we would be behind a big glass wall, just looking in from fairly far away, but it’d still be awesome. What we didn’t know was that Alex and I would go there that morning, and not even behind the glass, just there in the middle of all of these amazing pieces of technology!

After lunch we went back to campus where we had an amazing lecture about nanotechnology from Dr. Padraig Moloney. We learned a lot about carbon nanotubes, and the uses these could have within our mission. I’m sure we will be taking these technologies into account once we’re planning our mission.

In the evening we had a Tex Mex night, and we knew there was going to be a special guest there. When we got to the restaurant, I was looking around when I suddenly recognized a familiar face. It was astronaut Chris Hadfield, and next to him was astronaut Cady Coleman. It took a bit of convincing myself to go up to Cmdr. Hadfield and say hi, but apparently I was the first student to figure out who he was.

By the time I went and said hi others had heard who he was and he was extremely nice to all of us. Cady was super nice, as well. We took pictures and chatted. Then they went to the front and talked about their experiences in space before giving a little concert. (Cady with the flute and Chris with the guitar.) After that it was the students’ turn to show off, and we had some pretty amazing shows.