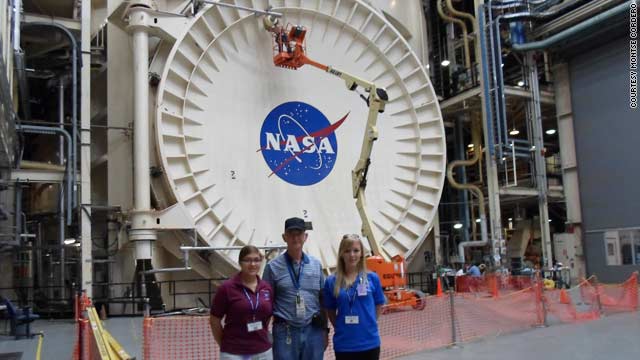 Space school, Day 5: How to launch a ship to low-Earth orbit

Editor's note: Montse Cordero is a 17-year-old student from Costa Rica participating in the Foundation for International Space Education's United Space School, a two-week summer program in Houston, Texas. She'll be blogging about her experiences in the program here. Need to catch up? Check out all her previous posts here.

I'm starting to get the feeling that all of these posts start the same way, but it's for a good reason: Every day is absolutely amazing in its own way!

Today started early again. Before school, our host took us to see some big vacuum chambers used for testing at Johnson Space Center. There are two chambers in the building: one, that is pretty gigantic, where they will test the James Webb Space Telescope, and another one that’s smaller.

The smaller one is actually human rated, so they’ll test space suits there (with people inside!). The big one takes over 12 hours to reach testing level of vacuum, and the smaller one will take more than eight. They are both quite impressive, we really enjoyed seeing them and learning about them.

Then we were off to school, where we finally started working on our project. We split up in different rooms, one per team. The Maroon Team worked on deciding which method we would choose to get our ship to low-Earth orbit. After lots of options and lots of arguments and analysis we decided to use a rail-gun system, which basically means that we will use electromagnetic energy to shoot our ship into space. Our decision was mostly based on re-usability, efficiency and cost.
END_OF_DOCUMENT_TOKEN_TO_BE_REPLACED

Mims, Florida (CNN) – As John Bundy loads his red commercial lawn mower into a flatbed trailer, it's hard to believe he used to manage a team of NASA shuttle workers.

Bundy, who sports a scruffy beard and speaks with a thick, Southern drawl, worked at the Kennedy Space Center for 31 years, the last six years as a manager in the Orbiter Processing Facility, a shuttle hangar.

Bundy is one of  8,000 shuttle workers laid off or facing termination from Florida's Kennedy Space Center after the end of NASA's  shuttle program.  This month marks one year since the program ended with the launch and landing of Shuttle Atlantis.