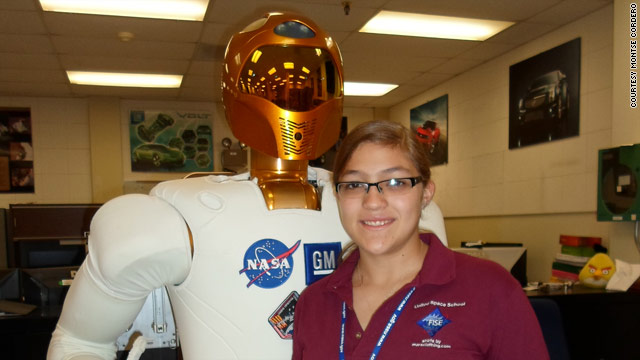 Editor's note: Montse Cordero is a 17-year-old student from Costa Rica participating in the Foundation for International Space Education's United Space School, a two-week summer program in Houston. She'll be blogging about her experiences in the program. Need to catch up? Check out all her previous posts here.

Today was the end of week one of United Space School, and it ended with an incredible day.

Before school, our amazing host took us to see the exercise machines astronauts use in space. We weren't there for long, but we will probably be back some morning next week.

Today was basically a field trip day, which was super exciting. Before we left for our first trip, we had a great talk about ECLSS (Environmental Control and Life Support Systems) on the International Space Station. We learned about all the factors that you have to take into account to take care of the crew up in the station. This was very important for the teams taking care of the astronauts on their way to Mars and once they get there (red and green teams), but it was tons of fun for the rest of us.

Then we headed out to Ad Astra, where they’re developing the VASIMR engine, which uses plasma to propel itself. This was especially exciting for me since the founder of the company is Costa Rican. We listened to a talk about the engine, and then we toured the lab. It was amazing; we saw the prototype engine there, and the huge vacuum chamber.

Following this we went to the Houston Museum of Natural Science, where besides seeing the museum we saw a planetarium show and did an extremely fun Challenger Center mission. Not too far from there was our next stop for the day, the National Space Biomedical Research Institute at Rice University. There we toured the facilities and had a talk about human physiology in space, which was quite interesting!

To finish off our day we drove outside Houston to stargaze. It was really entertaining and we saw some pretty cool things, like Saturn. I was surprised, however, by the amount of light pollution that you notice even outside the city!

Today was the first day of week two. This program is going by so quickly! My day began with meeting a friend of some friends called Robonaut. We didn’t get to see him powered on because it was too early in the morning, but it was still awesome!

We began school with some time in our breakout rooms (classrooms assigned to each team to work on their part of the project). It was a tough day for the Maroon Team. We ended up reconsidering our choices. We changed our entire design, so we ended up doing a couple days’ work in one.

Then we had a talk from our Executive Director Rob Alexander about how to make good presentations. I know it will prove really helpful once we're building our own. Our other talk in the day was about the Neutral Buoyancy Laboratory, the big big pool astronauts train in. We learned about how they test components in there and how they train astronauts there.

By the end of the day all of the teams had to have the basic decisions made for the project. We had our teams' spokespeople tell the other teams our conclusions. After school we got to go to a place called Putt Putt Fun House where we played arcade games and did cool stuff like Laser Tag!