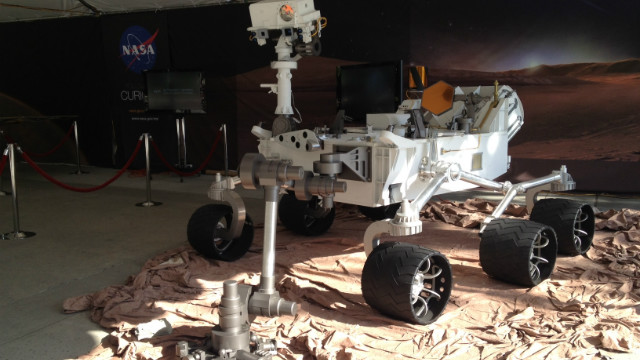 Mars landing: It could be crazier

Program note: Tune in to CNN.com/Live and CNN Mobile for live coverage of the Curiosity's landing on Mars, starting at 11:30 p.m. ET Sunday.

Pasadena, California (CNN) - An hour before the Mars rover Curiosity is scheduled to make its dramatic touchdown on the surface of our neighboring planet, there must be peanuts.

David Oh, lead flight director for the mission, explains that it has been a tradition for decades to open up cans of peanuts and pass them around to the team at NASA’s Jet Propulsion Laboratory responsible for overseeing the landing of the rover. Curiosity is scheduled to land at 1:31 a.m. ET Monday.

“It’s always been a lucky charm for us, and missions have always seemed to work out better when we had the peanuts there,” Oh said. “For landing this, I’ll take all the great engineering we have, and all the luck you can give us, too.”

Given how complicated and intricate this landing will be, it’s no surprise that scientists are taking extra precautions, even superstitious ones.

NASA has launched a tool called Eyes on the Solar System that lets you visualize Mars and its surroundings using the latest data. There’s even a mode where you can see the landing process. The popular NASA video “Curiosity's Seven Minutes of Terror” also illustrates just how extraordinary this landing is going to be.

Although "it looks a little bit crazy," Adam Steltzner, lead engineer overseeing how the rover is arriving, said, "I promise you it is the least crazy of the methods you could use to get a rover the size of Curiosity on Mars."

Steltzner gave reporters some of the landing highlights Thursday:

Starting out, the spacecraft is traveling 13,000 mph. Reaction control jets will help Curiosity steer its way through the atmosphere – called the “hypersonic entry phase.” Then comes the parachute, about 1,000 mph, with the world's largest supersonic parachute (69-foot diameter).

Even while cruising through space, the Mars Science Laboratory has been doing science. Since 10 days after launch, the radiation detector aboard the spacecraft has been helping scientists characterize the radiation environment, which is useful to know if you’re going to send humans there someday.

The radiation environment on Mars is different because it doesn’t have a global magnetic field protecting it, and its atmosphere is only 1% the thickness of Earth's.

Researchers have observed several spikes in radiation inside the rover during the journey, notably in March. While that particular spike wouldn't have been lethal to a human, on a mission to Mars that would last two to three years, those dosages add up. It is a significant contribution to an astronaut’s total lifetime dose limit, said Donald Hassler of the Southwest Research Institute in Boulder, Colorado.

Curiosity has 17 cameras on board, with seven in the mast alone. This means it can cover a range of resolutions from a few millimeters to a few microns in scale. Curiosity has cameras significantly more advanced than the ones aboard the most recent previous rovers, Spirit and Opportunity. “We have the equivalent of an 8GB card in each camera,” said Michael Malin, president and chief scientist of Malin Space Science Systems.

This rover has a tough challenge: understanding and determining the habitability of Mars. We know that life requires three main ingredients: a solvent (water), structure (carbon compounds) and energy, said Michael Meyer, lead scientist on the Mars Exploration Program. Other Mars missions have shown that the planet may have been habitable in the past. Curiosity will look for organic molecules, which may suggest that life has existed on Mars, although it’s not proof.

As Curiosity climbs up Mount Sharp, its destination, it will examine its flat sedimentary layers that formed over time. We don’t know how this mountain was created, because Mars has no plate tectonics like Earth does, says John Grotzinger, the lead scientist on the Mars Science Laboratory Mission.

There is a lot to be excited about for Curiosity on Mars. But first it has to get there. The Jet Propulsion Laboratory is buzzing with scientists and journalists eager to see it happen.