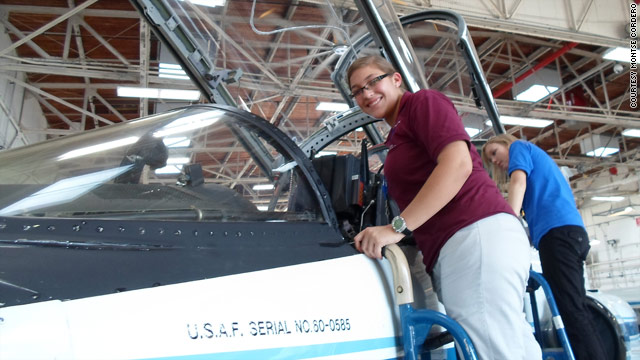 Today was basically the last day of school. It was our day to get whatever we had left of our work done. At first, it felt like we had way too much work for one day, but as the day progressed, everything started piecing together. All of our different lines of work converged, and we were fine.

We had to do a lot of work on designing our mission patch, 3-D model and presentation, but it all looks pretty good. Tomorrow, we will just give it some final touches, and we will present our project to the head teacher and mentors to get some feedback for the actual presentation on Saturday, so tomorrow is a big stressful day.

After school, though, we got one of the neatest tours so far. Our host took us to Ellington Field, where NASA has its aircraft. We got a tour from Bob Ess, who used to be the manager of the Ares I-X Mission and now works there. They had several T-38s, and we got to take a peek inside them. On the way to see them, we ran into astronaut George Zamka, who was really nice and talked to us for a bit.

The T-38s were absolutely amazing. Then we saw the Super Guppy from a distance. This huge aircraft can carry a big payload, but it definitely looks very weird. After this, we went to see the C-9 aircraft, successor to the Vomit Comet. This plane no longer makes zero-G flights. They leave that to the company Zero G, whose plane we also saw.

To finish, we saw a B-57 plane. It has a huge wingspan, and even though it was designed to be a bomber, NASA uses it for scientific research. We even got a patch from that one!

To continue our amazing evening, we headed to an indoor soccer match with people from Boeing. My team ended up losing (probably my fault!), but it was lots of fun and a good way to get some exercise in.

To end the night, we went flying. A few of the mentors wanted to fly, so our host kindly took them, and we got to go as well. All I can say is that downtown Houston at night is gorgeous from the sky! Now I’m pretty much just looking forward to tomorrow. Hope everything goes well!

So, no more school days left. Today was an insanely intense day. The plan was to make the last tweaks to our final presentation and practice it a few times since the actual one is tomorrow.

Our day began with finishing our presentation. We added images, split the slides among the team and practiced our song (every team has to write new lyrics for a popular song and then sing it during the presentation). Then we had our first practice run. The audience was our mentor, Sinead, and the Red Team's mentor, Andy. We did it fairly well for our first time, and they gave us very valuable feedback.

Then we headed over to the auditorium where we’re actually presenting tomorrow, and we had our second run. This time, the audience was Sinead again, Ben (the head teacher) and Chris Greenfield (he was the school’s head teacher before Ben). We were nervous, but it worked out. They gave us lots of feedback too, mostly about slide design and how we went about talking and generally presenting. Not as scary as we had expected it to be!

After lunch, we had our third and last run of the day, this time with Justin Kugler in the auditorium. He’s been there all along the process, but he was there today to ask us tough questions so we could be more prepared for tomorrow. We were a bit more scared about this one, but we ended up doing quite well! We went back and fixed all the things we were told about and figured out all we could.

Not long after, it was time to leave; we were going to see the Dynamo vs. Red Bulls soccer match. We got there a bit early, and all I could think of was how hot it really was. It was great fun to see a soccer match in a country different than mine. It was an exciting match, and Houston won 2-0, so that made it even better! As the game ended, exhaustion started to set in. It was a long day, and we finally headed home for some rest, ready for our final presentations tomorrow!