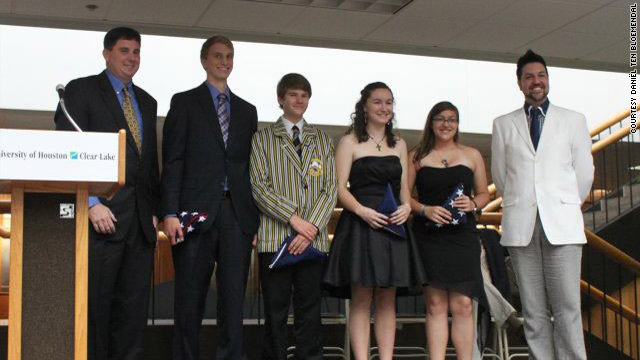 It’s really weird to be writing a wrap-up post. It seems like just yesterday that I was writing about how I was getting ready to start space school, and I was feeling all nervous about meeting so many new people. Then again, when I think about everything I’ve learned since writing that post, it seems like it was ages ago. I think that all of the participants will agree that United Space School is some sort of time machine - a very good kind!

Since my last post, lots of things have happened. We had our final presentations Saturday and had to be at the University of Houston-Clear Lake, wearing our uniforms one last time. We had all practiced our parts and were confident in our work, and we were extremely nervous but also eager to show it to the world.

Each presentation was divided in three main parts: the presentation, questions from the audience (who were, scarily enough, a bunch of rocket scientists and space professionals), and finally our team song. The song is a United Space School tradition; each team picks a popular song, writes new lyrics for it having to do with the mission and sings it at the end of the presentation.

The presentations started with the gold team (don’t call the members yellow, or they’ll be angry and might take your funding away). The team was in charge of mission control, budgets, space law and such. The members explained how everyone’s budget was split, where they got the money from, which teams had the most and why, what their mission control center would look like, and how they dealt with space law. Questions were asked and then came the song. As everyone clapped and they returned to their seats, it hit me: We were up next!

Maroon team, my team, was up. We covered the design of our rocket, how it worked, from where we would launch, our marketing strategies, emergency protocols and education opportunities (what I talked about). Everything seemed to go well. I’d forgotten what I had prepared to say, but I just decided to explain what I knew, and it went pretty well.

It was time for questions, the most nerve-wracking part. We got lots of questions. Most we knew the answers to, but there were a few things that we hadn’t even thought about. Then it was finally time for our song, and our rendition of a modified "Call Me Maybe" sounded pretty good in my opinion.

The presentations went on. The red team had a good idea on how it was getting to Mars, the green team had quite an interesting habitat, and the blue team had a full plan on how it was exploring the red planet. The questions were tough, and the songs amazing.

After the last one, Rob Alexander (executive director of the Foundation for International Space Education) said that officials knew they had grilled us pretty hard but they wanted us to know we had impressed them and he was going to recommend to the board we all graduate. Lots of cheering followed, and before we knew it, we were out of there.

A few hours later, we had a pool party. It felt great yet weird to know that we were done with our projects. We swam, we played volleyball in the pool, we had diving competitions, and we ate. Some of us had S’mores for the first time (man, they’re good). None of us wanted to think it was one of our last activities together; we just enjoyed every second to the max.

The next day was graduation. Even though space school is a two-week program, graduation is a big deal. We arrived at the university all dressed up. We knew it was our last time together. Everyone had shirts to sign, things to share and hugs to give.

The ceremony finally started. We were all sitting with our teams for one final time. Speeches were given, and then the mentors were called out one by one. Each mentor got a certificate; they talked briefly about their teams, and then they called their team members one at a time and we were given our diplomas.

To finish, Alexander gave out some special awards. The first one was for leadership and sportsmanship during the United Space School vs. NASA All Stars match, and Stephen Orr from Kentucky got it. The award was a Houston Dynamo hat signed by all the players.

Then came the presentation of the flags in which they gave flags flown over Johnson Space Center to outstanding students. The honorees were Sally Bruce and Adrian Robb from New Zealand, Garrett Garneau from Kentucky and me. I was excited when I heard my name. I knew I’d done the best job I could, but I did not expect to be recognized, especially with such an amazing award.

There were lots of hugs and plenty of tears. As soon as I hugged the first person goodbye, I started crying my eyes out. It took us forever to say goodbye - no one wanted to leave. Pictures kept being taken, with people promising to keep in touch. Slowly people began to go.

The landing of rover Curiosity on Mars was the same night, and a few of us got the chance to go witness it at Space Center Houston. There were tons of activities there. I was glad to find out that a few friends were there as well. I ended up watching the launch with them, and it was tremendous fun.

It was nice being able to let my inner space nerd out with other people.

We went back home late and packed and stayed up all night. The next morning we said our final goodbyes to our hosts and were dropped off at the airport. I hate goodbyes, but I guess no one likes them.

After the program, I realized that I not only got some amazing space knowledge as expected, but I also made new friends, learned new teamwork skills and learned about how people live all around the globe.

Being with a host family taught me about how other people’s families work. It allowed me to see how similar we are yet how different. I will miss them all dearly.

I will finish high school in a few months, and then I’ll be applying to universities for math and physics programs. I love space, and I hope to one day work for the development of this science frontier. It’s time to put into practice everything United Space School 2012 taught us.

(CNN) - An unmanned moon lander under development crashed and blew up during an engine test Thursday afternoon at NASA's Kennedy Space Center, the space agency reported.

There were no injuries in the failed test of the lander, dubbed "Morpheus." The craft had gone through several previous exercises in which it was hung from a crane, but Thursday was to have been its first free flight.

Instead, the prototype rose a short distance, rolled over and slammed into the ground. The craft caught fire immediately and exploded about 30 seconds later.

"The vehicle itself is lost," Jon Olansen, the Morpheus project manager, told reporters. "But we are working currently on gathering more data and information to understand what occurred in the test and how we can learn from it and move forward."

Olansen said operators have recovered memory devices from the wreckage and will be pulling the data off of them for clues to the cause of the accident.

"From early indications, it seems to be within our guidance navigation control system, seems to point toward hardware," Olansen said.

In a written statement, NASA said failure is "part of the development process for any complex spaceflight hardware," and designers will learn from whatever caused Thursday's crash.

The Morpheus lander is designed to carry up to 1,100 pounds of cargo for a future moon mission. Its engines are fueled partly by methane, which the agency says is easier to handle and store than other propellants such as liquid hydrogen or hydrazine.

Olansen said the space agency has spent about $7 million on the project over two and a half years, and the test lander lost Thursday was "in the $500,000 class." Another one is currently under construction at the Johnson Space Center in Houston and may be complete in two to three months.

"We want to make sure that what we learn today gets applied to that next vehicle," he said.