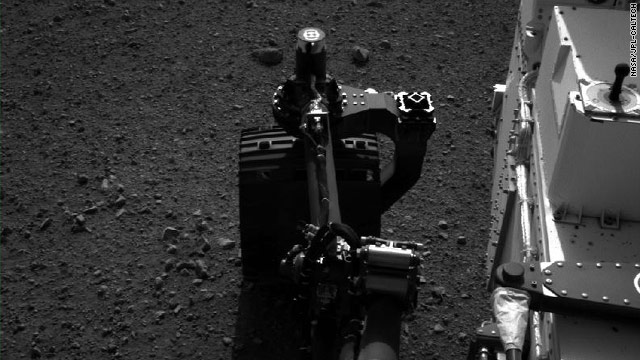 Curiosity's rear right wheel was tested to check the steering ahead of the rover's first drive on Mars.
August 21st, 2012
03:25 PM ET

Curiosity gets its learner's permit

The Mars rover Curiosity is about to take its first test drive. It's kind of like getting a rover learner's permit.

The science team is sending up commands to Curiosity telling the six-wheeled rover to drive forward, turn and back up. Mission manager Mike Watkins says the entire maneuver should take about 30 minutes. Watkins says we will, "definitely see tracks and definitely see it move." In all, Curiosity will move about 10 feet.

This is a major event. Nearly the entire two-year mission hinges of Curiosity's ability to drive to rocks or terrain of interest, gather samples and analyze them. It would be considered a major failure if for some reason Curiosity can't move.

NASA will hold a news conference after the drive to discuss how it went. A successful test drive will set the stage for Curiosity to head out likely by the weekend on its first real traverse of the Martian landscape.

Several other tests have already been successfully completed. Watkins says, "We continue to hit home runs here." The arm with the hammer drill attached has been "stretched" to put in NASA terms. The team also told Curiosity to wiggle its right rear wheel. It did.

So far, throughout all of the testing of Curiosity's system, the science and engineering teams say they've only found one problem. A wind sensor on Curiosity's Mars Weather Station has sustained permanent damage. The science team believes wires on the sensor are broken. The scientists say they may never know what caused the damage.

One possibility is that small rocks hit the circuit board on the wind sensor. The rocks may have been lofted into the air by wash created from the rocket motors during the rover's descent to the planet.

Deputy Project Manager Ashwin Vasavada says, "It degrades our ability to detect wind speeds from certain directions." Vasavada added there are ways to work around it.