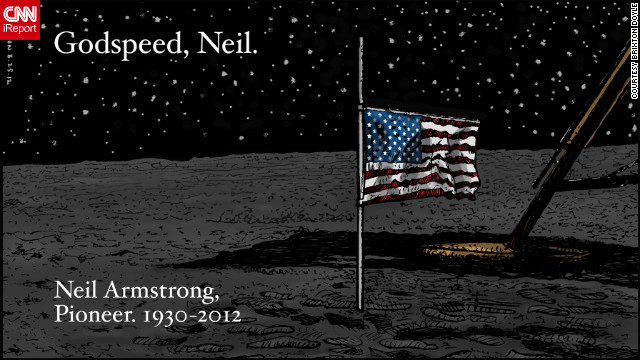 Mike Black of Belmar, New Jersey, said he became a science teacher in part because of the inspiration of seeing humans in space.

"Neil knew that it was the efforts of 400,000 people to bring Apollo from JFKs challenge to reality. And we did it. We really did it. 1,000 years from now, when most of our history is forgotten, people will remember Apollo 11 and the name Neil Armstrong, the first human to set foot on another world. Neil Armstrong was also my inspiration as a child. I became a science teacher in large part because of the fascination caused by the Apollo space program. Apollo made science and engineering cool."

Some readers said they had connections among their families. Jimmy Hawkins of Los Angeles shared a photo showing his father, Tommie Hawkins, with Armstrong on a film set. The elder Hawkins was a prop master with Armstrong in Los Angeles in the 1970s. Working in the entertainment business like his father, he would often visit to catch up on new film projects they were both doing.

"He really liked Neil Armstrong," Jimmy Hawkins said. "When my dad passed away, I thought about how he worked with Neil Armstrong, he had a lot of respect for him."

In Farmersburg, Indiana, iReporter Mark Ivy was shaking his head in disbelief as he thought of  the three  occasions on which he'd gotten to meet Armstrong. Like many others, he described the former astronaut as a man who was firmly planted on the ground.

"It was awe-inspiring being able to sit and talk one-on-one with the first man on the moon. He was very humble, a real hero, who was more interested in praising others than taking the fame and credit for himself. Our astronaut hero, when asked how he felt about his place in history, deflected the question and began talking about the hours, the sweat, the intelligence of the ground staff that made it all possible for him to blast into space."

He remembers watching Armstrong walk on the moon and says he felt a surge of pride and hope.

"There was pride and a sense that if Neil Armstrong could make it to the moon, there was no star far away that we could not just reach out and grab it and pull it back down to Earth," he said.

James:
"Five Greatest Neil Armstrong Quotes.
5) 'It suddenly struck me that that tiny pea, pretty and blue, was the Earth. I put up my thumb and shut one eye, and my thumb blotted out the planet Earth. I didn't feel like a giant. I felt very, very small.'
4) 'Houston, Tranquility Base here. The Eagle has landed.'
3) 'Here men from the planet Earth first set foot upon the moon. July 1969 AD. We came in peace for all mankind.'
2) 'That's one small step for man. One giant leap for mankind.'
1) 'The important achievement of Apollo was demonstrating that humanity is not forever chained to this planet and our visions go rather further than that and our opportunities are unlimited.'
I am greatly saddened that I never had the opportunity to meet him. I know the chances of me getting to do so were extremely slim, but it still hurts."

This person shared their "Where were you?" moment.

saveg1: "Sad that Mr. Armstong has left us, but one thing he has left me is that day I will never forget. I was standing on Main Street in Disneyland on July 20, 1969, when the loudspeaker came on and the announcer said, 'Ladies and gentlemen, man has just landed on the moon.' The whole place just erupted in cheers! I mean for a long time. RIP Mr. Armstrong."

Some posted poetry to express their feelings.

Michael Fatten:
"Our Magellan has died. Our Columbus has died. Our Captain Cook has died.
Guided by the lonely star
Beyond the Earth, he traveled far
He's found the havens, fair and free
and beaches of the starlit sea.
Ship by ship, He's sailed West
to fields and mountains ever blessed.
He leaves this little earth at last
I see the star upon his mast."

Sandra Clifton, who wrote a poem of her own on CNN iReport about the way people's perceptions of space have changed, said humans are drawn to explain the heavens.

"In light of the current exploration of Mars, I think the Apollo missions have such a profound significance, having debunked many of the old myths and wives' tales about what was 'out there.' I doubt anyone really expected the Mars rover to catch a glimpse of 'little green men' any more than we expected the lunar missions to reveal a moon made of cheese, but it does harken back to a more innocent era, as well as pointing forward to the many unknowns that still spark our interest in further exploration."

Rummel Pinera of Muntinlupa City, Philippines said reaching the moon was a huge achievement for humans who long used it as their "fluorescent light" at night, and inspired him to be interested in the environment.

"Armstrong’s walk on the moon has a unique impact on me. Such a 'walk' inspired me to become more aware about the wonders of nature and universe. Though I didn’t become a scientist nor a science-fiction author, I became an ardent environmentalist due to the inspiration derived from such a 'moonwalk.' Such moonwalk encouraged me to know more things about the environment and, also, to seek out more effective means of protecting the environment and natural resources from pollutants and abuses. Armstrong’s moonwalk proved to me that humans can make wonders by just being determined and courageous in what they’re doing."

Cartoonists on CNN iReport such as Jim Brenneman shared their own artistic visions of Armstrong's milestone. Brixton Doyle, who drew the image shown up top, tried to explain why people are so fascinated by that white sphere in the sky.

"Dinosaurs walked with the faint, white glow of our moon on their backs. Billions of lives have come and gone on our Earth over the millennia, the very breadth of humanity - all of history recorded and unrecorded. In a brief and majestic time, by vantage point, long ago, or not so long ago at all, 12 men from Earth walked upon a new world. Neil Armstrong was the first among that rare and brilliant company. I'm looking at the waxing moon overhead tonight. It is obscured by clouds and my vision is somehow, irrevocably dimmed."

Do you want to share a tribute to Armstrong, or do you have a moon landing memory? Share your opinion in the comments area below or show us your moon photos via CNN iReport.