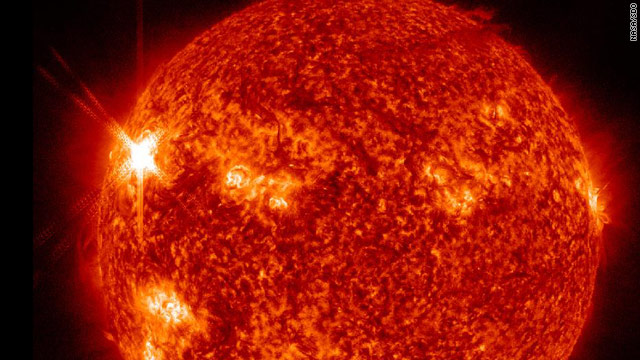 “We're studying how these solar loops work, which contributes to the knowledge of space weather," said Paul Bellan, professor of applied physics at Caltech, said in a statement. “It takes some time for the plasma to get to Earth from the sun, so it's possible that with more research, we could have up to a two-day warning period for massive solar flares.”

He makes his research comparable to meteorology. Hurricanes cannot be forecast, for example, without understanding their antecedents, like high-pressure and low-pressure fronts.

Bellan and graduate student Eve Stenson discovered that magnetic forces manipulate how plasma loops are formed. They compared the process to injecting toothpaste into a tube from both ends, but with magnets in the toothpaste that would alter its behavior from what it normally would do.

Bellan and Stenson re-created plasma loops with a pulse-powered, magnetized plasma gun. Electromagnets inside a vacuum chamber generated an arched magnetic field that released hydrogen and nitrogen gas at the arch’s endpoints. A high-voltage electrical current was then applied at the endpoints, which turned it into plasma. This plasma traveled at approximately 6 miles per second.

“One force expands the arch radius and so (it) lengthens the loop while the other continuously injects plasma from both ends into the loop," Bellan explained in a statement. "This latter force injects just the right amount of plasma to keep the density in the loop constant as it lengthens.”

The plasma’s behavior was studied with the use of optical-filtered high-speed cameras since the whole process happens within seconds. Hydrogen and nitrogen gases, which glow different colors as they turn into plasma, helped distinguish different components.

This technique, according to Bellan, has never been done before.

“For each experiment, you'll only see the light from the hydrogen side or the nitrogen side in the images," Stenson said in a statement. "But these experiments are very reproducible, so we can put separate images on top of each other to see both plasmas in one picture.”

Moving forward, Bellan will attempt to discover how loops coexist.

“We want to see if they can merge and form one big loop," Bellan said in a statement. "Some people believe that this is how larger plasma loops on the sun are formed."

Their findings are reported in the journal Physical Review Letters and were funded by the National Survey Foundation, the U.S. Department of Energy and the Air Force Office of Scientific Research.

The 1859 Solar Superstorm produced the largest solar flare on record. It knocked out telegraph communications across the globe. The National Academy of Sciences reported in a 2008 study that if a similar storm happened today, it could disrupt satellite communications and GPS systems, which could cost $1 trillion to $2 trillion to repair.