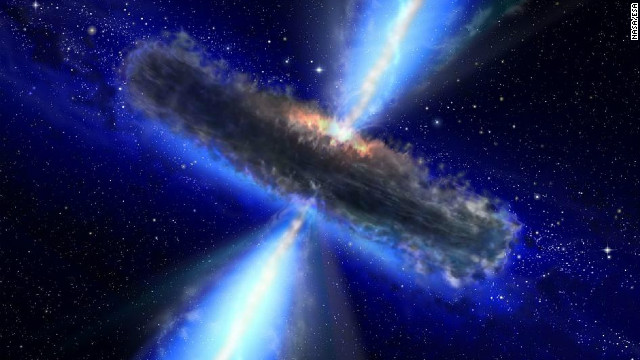 Hidden behind dust in deep space are brilliant galaxies with black holes that scientists are just beginning to learn about.

NASA’s Wide-field Infrared Survey Explorer, known as WISE, has found millions of black holes and about 1,000 dust-obscured galaxies with very high temperatures, which NASA is cutely calling "hot DOGs" for short. They are believed to be the brightest known galaxies.

Hot DOGs, which have supermassive black holes at their centers, can emit more than 100 trillion times as much light as the sun, according to researchers. But they do not appear as bright in images because they are covered in dust.

“It changes our concept of how brilliant and powerful galaxies can be,” said Peter Eisenhardt, project scientist for WISE at NASA's Jet Propulsion Laboratory. “We are finding quite a few objects here that are brighter than what we knew before, and we’ve only combed through about 10% of these hot DOGs.” 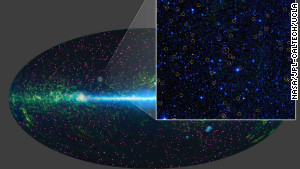 WISE is equipped with a telescope that captured millions of images of celestial objects, including black holes, galaxies, stars and asteroids. The information obtained from WISE may help scientists explore the relationship between black holes and their surrounding galaxies.

The state-of-the-art technology of WISE allowed scientists to discover that the 2.5 million black holes were nearly 10 billion light-years away. Older technology was unsuccessful at detecting them because of dust, which concealed the black holes’ existence. WISE, however, captured them immediately.

“These varied black holes that are hidden in gas and dust are thought to dominate and we have not had a good measurement of how many there are until now,” said Daniel Stern of JPL, lead author of the WISE black hole study.  “WISE has allowed us to do this across the whole sky.”

Stern added that the next steps will be to find out how black holes behave and examine the high-energy X-ray radiation associated with them.  NASA's Nuclear Spectroscopic Telescope Array, for which Stern is the project scientist, launched in June to explore black holes with its "X-ray eyes."

WISE also found that the extreme galaxies have temperatures more than double those of other galaxies that burn with infrared light. One possible explanation is that, in a hot DOG, a powerful burst of activity from the black hole heats the dust in the galaxy.

The WISE mission orbited the Earth approximately 15 times daily for 14 months at an altitude of 525 kilometers (326 miles). Snapshots of the sky were captured every 11 seconds.

Most of WISE's findings have been confirmed by the W.M Keck Observatory in Mauna Kea, Hawaii, the Gemini Observatory of Chile, Palomar’s 200-inch Hale telescope in California and the Multiple Mirror Telescope Observatory near Tucson, Arizona.

Eisenhardt says it is still unclear which the hot DOGS produce first - the black hole or the rest of the galaxy’s stars. But he points out some evidence showing that black holes may come first or, as he put it, “the ‘eggs’ may have come before the ‘chickens.’” More research is needed to validate the sequence of creation within hot DOGS.

It's clear that black holes aren't rare, and have been around for a long time. Research published last year suggested that at least 30 million black holes had formed before the universe was 1 billion years old.

WISE's mission will open a new door into the world of galaxy evolution in coming years, experts say. With more extensive research, NASA’s findings could change the landscape of astronomical science  - or as Eisenhardt put it,  “push the boundaries of what we think is physically possible.”

The observations were published in the Astrophysical Journal in three papers. You can read them here, here, and here.