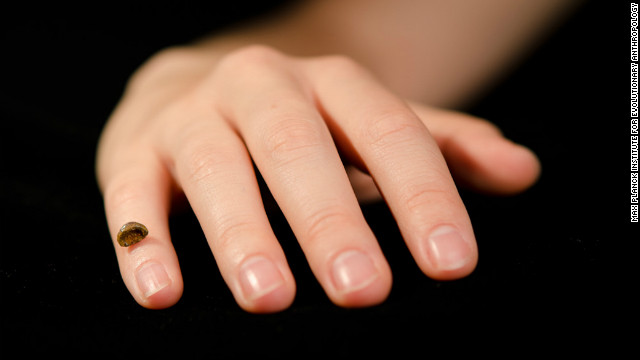 Some of these genetic changes that are unique to humans have to do with brain function and brain development, Paabo noted.

“This is essentially a ‘genetic recipe’ ” for being a modern human, Paabo said in an e-mail. “Scientists can now start working on understanding how we differed from Denisovans and Neanderthals.”

Little is known about the Denisovans. Although some of their remains were found in southern Siberia, their genetic signature is not present today anywhere apart from islands in the Pacific. About 3% to 5% of the DNA of people from Melanesia (islands in the southwest Pacific Ocean), Australia and New Guinea as well as aboriginal people from the Philippines is from the Denisovans.

It’s only people in those places who have Denisovan DNA, Paabo said, which means the Denisovans must have been in Southeast Asia at one time.

By contrast, everyone who lives outside Africa today probably has some Neanderthal DNA in them, Paabo said in a news briefing Wednesday.

Paabo was reluctant to say Denisovans and Neanderthals were separate “species” but rather called them extinct “groups.”

Scientists aren’t sure how old the finger bone used for the DNA sequence really is. Archaeologists date it to 30,000 to 50,000 years old, but based on genetics alone, the biologists who conducted this study believe it could be 80,000 years old. It appears to have belonged to a juvenile female. She may have had dark skin, brown hair and brown eyes, based on genetic associations.

The genome analysis suggests that our ancestors and the Denisovans’ ancestors must have split from each other as far back as 700,000 years ago, although there’s uncertainty around that number. But it appears the Denisovans mixed with (and mated with) indigenous people in Papua New Guinea and Australia, Paabo said.

“They probably became extinct about the same time as Neandertals when modern humans spread around the world,” Paabo said.

By sequencing single strands of ancient DNA, the researchers confirmed that interbreeding with humans must have occurred, and that Denisovans are related to Neanderthals, said Chris Stringer of the Natural History Museum London, who was not involved in the study.

The study also suggests that, on the whole, Europeans have less Neanderthal DNA than eastern populations. Even though Neanderthals mostly lived in Europe, people in eastern parts of Eurasia and Native Americans have more Neanderthal material than modern-day Europeans, said study co-author David Reich of Harvard University.

It could be that there were two separate gene flows into modern humans, or that there was a separate group of people who came from Africa into Europe but not Asia, said John Stewart of Bournemouth University, who was not involved in the study.

It appears the Denisovans had a low level of genetic diversity, which is consistent with Stewart and Stringer’s previous findings. Although scientists had only one finger bone to work with, a single person’s DNA contains signatures of a multitude of generations of ancestors.

This lack of diversity may also mean that Siberia wasn’t a core habitat for the Denisovans; perhaps they only went there during warm periods in small numbers but usually lived farther south.

Paabo’s study suggests the population may have begun small but quickly burgeoned, so genetic diversity didn’t have much time to increase. More research is needed to see if the Neanderthal population had a similar trajectory, the study found; if so, one single group of ancient creatures leaving Africa could have evolved into both Denisovans and Neanderthals.

Many questions remain unanswered, Stringer noted: What did Denisovans look like? Does the Denisovan DNA present in some humans today serve any function - and what about genetics from Neanderthals? Did Neanderthals and Denisovans mate with each other, too?

It’s likely that Denisovans and Neanderthals did interbreed, Stringer said, since they both lived in Eurasia for hundreds of thousands of years, and there’s Neanderthal DNA in a fossil foot bone discovered in the same Denisovan cave.

“Recognition of such interbreeding will inevitably complicate the untangling of the relationships between these ancient groups of humans, and their contributions to people today,” Stringer said.