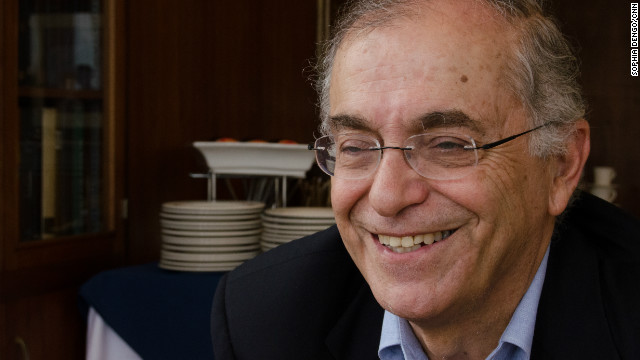 JPL director: Visiting Mars a ‘question of national will’

August has been a busy month for Charles Elachi, director of NASA’s Jet Propulsion Laboratory.

The rover Curiosity successfully landed on Mars on August 6, flawlessly executing the improbable acrobatics of touching down on the Red Planet intact. President Obama congratulated Elachi and colleagues on the achievement and complimented them on the coolness of “Mohawk Guy” on August 13. Curiosity also completed its test drive and passed many initial inspections.

This week, Elachi visited Atlanta’s Georgia Institute of Technology, where he signed an agreement with the school that will involve exchanging faculty, inviting students to JPL, and other collaborations.

Elachi sat down with CNN's Elizabeth Landau and Sophia Dengo for a chat about the future of space exploration. Here’s an edited transcript:

That’s one step in a long-term Mars exploration and planetary exploration program, which first would lead to bringing samples back. In a sense we are building the capability step by step.

If you go back 15 years, the first time we landed a rover on Mars it was called Sojourner. And it was about (the size of) a shoe box. So, just in this period, we moved from a shoebox to building a car-sized, one-ton rover landing on Mars, and being effectively a chemistry lab on wheels.

And the objective is to do detailed analyses of rocks on Mars to see if there are any organic materials, the ultimate thing we want to see is: Was Mars ever habitable? Did life evolve on Mars? Why it did or why it did not, and how does that compare to Earth?

In a sense you are doing an experiment of comparing those two planets which formed roughly at the same time… but they ended up going in different ways, and the question is: Why did that happen?

CNN: If Curiosity found life, what would happen?

Elachi: Clearly, that’s not the fundamental objective. We’re doing step by step, looking at the chemistry first. If you recall, (the previous rovers) Spirit and Opportunity’s focus was on geology, which led us to believe – the science community – to conclude that Mars actually had oceans many billions of years ago.

If there were oceans, could life have evolved? Curiosity is looking at the chemistry to see: Did we have the right ingredients?

Now, if we find life, even if we’re not expecting it, even if it’s dead life, that would be a huge kind of event. As of today, we know about life only on this planet. Conceptually we think it exists because of the size of the universe, but we don’t have any proof. That would be the discovery of the century, if we see anything like that.

CNN: Would the public know immediately?

Elachi: Oh sure. Our data is made available almost immediately to everybody. And that’s part of the excitement, is the engagement of the public in what we are doing. So, as you know, on the landing, night of the landing, just on the NASA landing, there were 14 million households watching that landing, even though it was 1:30 in the morning on the East Coast. That’s only on the NASA website. I’m going to guess at least 50 to 60 million people in the U.S. were watching that landing, and the excitement which went with it.

Just the e-mails I got within a few minutes from people even that I don’t know. Almost every e-mail had the word “inspirational” or “uplifting the spirit of what we are doing.” One person said he completely forgot about his debts about the day-to-day problems by watching something really inspirational.

Clearly, there is a lot of public engagement and public interest. The way we do that is to have the public feel like they are part of the exploration, they are with us day in and day out. And we’re doing this on behalf of the general public. That’s why our data, whatever we find out, is made available very quickly.

CNN: What are other targets for finding life?

Elachi: Key targets are the where we know water exists. If you have liquid water, that means the temperature is right – it’s between 0 degrees and 100 degrees centigrade. So the question is: If there are organic materials, could life evolve?

Of the places which have that characteristic, Europa is one of them. We believe there is an ocean below the surface, that there is a layer of ice similar to what you have in the Arctic, but maybe a little bit thicker than it. A key question is: How thick is that ice on the surface and is there life in the ocean below?

We are looking at a mission that probably could go early next decade to actually completely map Europa (a moon of Jupiter). Do a sounding of the ice (analyzing echoes), see how thick it is, and then possibly in the future put a lander which could drill down or melt its way down in the ocean.

We think by exploring (these targets), we might be able to put a story about how life evolved in our solar system, and what are the environments that are amenable to life.

Also there is interest in a place like Venus, because Venus is similar to Earth size-wise and in distance to the sun, but it went in a completely different direction. The question is: Why did that happen? Is that because of a runaway greenhouse gas effect which happened which warmed the planet?

I think (exploring these places) would shed light about the past and potentially the future of our own planet. There is a direct connection to our day-to-day life here.

CNN: Do you think a person will visit Mars in your lifetime?

Elachi: I don’t know in my lifetime, maybe in your lifetime, you look younger than me. Yeah, I would say there is possibility in the next 20 or 30 years. There is a possibility of doing it. I think engineering-wise, we know how to do it to some level. We still need a lot of development and a few inventions to do that.

CNN: Tell us about InSight, which is launching in 2016

Elachi: The purpose of the InSight mission is to put a fixed lander, not a rover, which have a very sensitive seismometer. So the idea is to detect quakes on Mars. The reason that’s interesting is not only the quakes themselves, but the quakes because they propagate through the side of the planet, it will allow us to get a picture of the internal structure: the core, crust, and be able to compare it to Earth. Most of our information about the Earth’s internal structure comes from earthquakes, by seeing how earthquakes propagate and so on.

It will be sitting there for two years actually listening (for seismic waves). An internal probe (a drill) will go down five feet and will measure the heat flow, heat coming from the inside of Mars (to the surface).

CNN: Do you think there is life elsewhere?

Elachi: There is no reason why not. You have literally billions of stars, probably billions of planets, there’s going to be a fair number of them which have similar environments and the laws of chemistry and physics and biology are the same.

It would be amazing if we don’t find it, but as scientists we have to prove it, but we have to actually observe it to prove it. And then it would be interesting to see: did it evolve like our life?

CNN: Are you afraid that the United States is going to lose its place in the space race?

Elachi: It’s always a challenge. I say, it’s extremely hard to be No. 1 and to stay No. 1, because then you have to keep running faster than anybody else. It’s easy to be No. 3 and No. 2. But if you are No. 1, you have to really make a strong investment in education, in technology, in being bold in your vision, to stay at No. 1. So, I sure hope that the leadership of our country and the general population see the values that science and technology have brought to our lives.

That’s what made us economically so powerful, because we are by far the best technologically, and space exploration was a trigger in making that happen.

I remember when we did the Apollo landing, that’s what triggered a lot of people to be inspired. So hopefully the mission like this Mars mission or future planetary exploration and astrophysics will inspire young people about wanting to do these kinds of daring things.