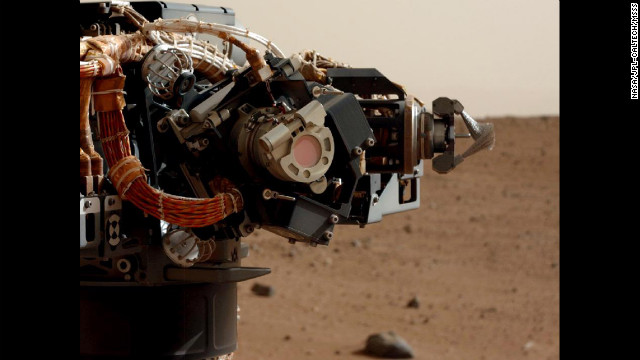 The left eye of the Mast Camera on NASA's Mars rover Curiosity took this image of the rover's arm on Wednesday, September 5. Curiosity arrived on Mars early on August 6 and began beaming back images from the surface. See all the images here as they are released.
September 7th, 2012
03:48 PM ET

Fashion Week has begun in New York, but for space enthusiasts, the most exciting glamor shots are coming from Mars.

The much-celebrated rover Curiosity has so far strutted 109 meters (358 feet) on the surface of the Red Planet, according to its odometer, and she's looking great, NASA scientists say. The 2000-pound SUV-sized rover has been on the surface of Mars for about one month, and operating as expected.

"There have been no significant anomalies or wild cards thrown in where the performance on Mars differed significantly from the Earth," said Michael Watkins, Curiosity mission manager at NASA's Jet Propulsion Laboratory at a news briefing Thursday. "That's a real testament to the engineers that developed the system."

Space Shuttle Endeavour will soon make its final journey and will retire at the California Science Center in Los Angeles. But it will make some stops and flyovers along the way, NASA said Friday.

Endeavour, piggybacked on the back of a modified 747 airplane, is scheduled to leave Florida's Kennedy Space Center at sunrise on September 17. After flyovers of the area it will head west. Endeavour will make low flyovers of NASA’s Stennis Space Center in Mississippi and the Michoud Assembly plant near New Orleans.

The next stop, NASA says, will be Houston, which bid for a retired shuttle but did not get one. Several members of the Texas legislative delegation were outraged and expressed their displeasure to NASA, but to no avail.