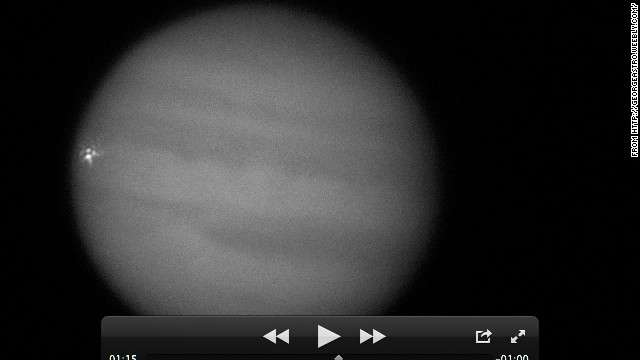 This screenshot from George Hall's blog shows what is believed by some to be an impact on Jupiter's surface.
September 11th, 2012
04:08 PM ET

A fireball thought to be an asteroid or comet hitting the surface of Jupiter was captured by two amateur astronomers early Monday, spaceweather.com reports.

One of the astronomers, identified as George Hall from Dallas,  posted a screen shot in multiple reports  and wrote about the discovery on his blog, George’s Astrophotography.

“The impact was observed by Dan Peterson visually this morning,” Hall wrote, crediting another space enthusiast with making the initial observation and posting what he saw online.

“When I saw the post, I went back and examined the videos that I had collected this morning …” he wrote in a post describing how he captured a video of the impact. “The video was captured with a 12" LX200GPS, 3x Televue Barlow, and Point Grey Flea 3 camera. The capture software was Astro IIDC.”

Hall posted a four-second video of the impact. He wrote that it was taken at about 6:35 a.m.  Monday on his Flickr page.

Spaceweather.com compares Hall’s images with other impacts to Jupiter’s surface reported by NASA in 2009 and 2010.

A NASA Science News post from September 2010 stated: “Jupiter is getting hit surprisingly often by small asteroids, lighting up the giant planet's atmosphere with frequent fireballs.”

The post went on to say that Jupiter is frequently hit by small objects, causing impacts “bright enough to see through backyard telescopes on Earth.”

SpaceWeather.com wrote: “Astronomers around the world will now begin monitoring the impact site for signs of debris - either the cindery remains of the impactor or material dredged up from beneath Jupiter's cloud tops.”

Are you an amateur astronomer with images of the Jupiter impact? Share your videos with us or write about your observations in the comments below.