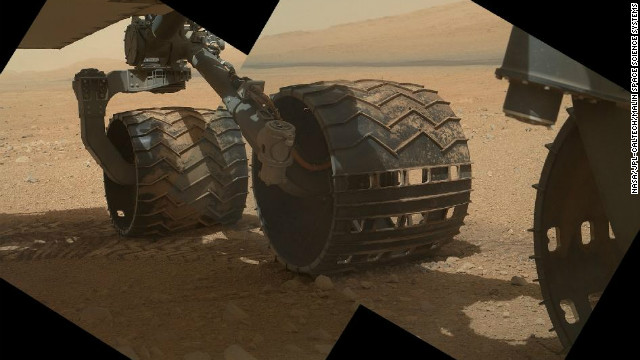 Curiosity is on its 37th Martian day, and it's almost ready to head out on its first scientific expedition.

The 2,000-pound wonder-rover is about to complete its (or "her," if you're fond of spacecraft) final day of checkouts.

Scientists have been testing many of the instruments and components of the rover and updating software. Curiosity has performed "almost flawlessly" in all aspects, Jennifer Trosper, Curiosity's mission manager, said at a news briefing Wednesday hosted by NASA's Jet Propulsion Laboratory.

More on the Mars rover mission

"Starting on Friday evening, the plan is to drive, drive, drive," Trosper said. The rover will stop when Curiosity finds a rock that scientists deem appropriate for conducting contact science observations.

But first, on Wednesday, the rover will point a camera at the sun to capture the transit of the Martian moon Phobos.

• What's up with the holes in the wheels? "That’s Morse code for 'JPL,' and it makes that imprint on the ground," said Joy Crisp, a deputy project scientist with the mission.

But that's for more than vanity: NASA scientists know what the exact spacing between those marks should be, so if there's wheel slippage, the distance between the marks will be different.

• Curiosity has a 1909 penny on board that the MAHLI camera recently photographed for the purposes of calibration. Abraham Lincoln was first featured on the American one-cent coin in 1909. Grains of Martian sand are visible on the penny.

• Mars rover scientists are living on Mars time; a day on Mars is about 40 minutes longer than on Earth. But by the rover's 90th day on Mars, the transition back to seven-day Earth time can begin, Trosper said.

They'll probably still need to cover all hours except from midnight to 5 a.m.; shifts will need to be adjusted accordingly, depending on when the data come down, Trosper said.

"Probably a few months after that, we'll get to the point where we don't have to adjust the shifts every day, because we'll get much more efficient in our ability to build the commands and look at the data and do the assessment."

Curiosity will be headed for Glenelg, a site that has three types of terrain, including layered bedrock. This could be a good place for Curiosity to drill.

Then the rover will go to Mount Sharp, a 3-mile-high mountain formed from rock layers that built up over time. Curiosity will climb part of this mountain, testing the different layers. The goal is to look for signs that life could have once existed on the Red Planet.

What we've done on Mars, and what's next