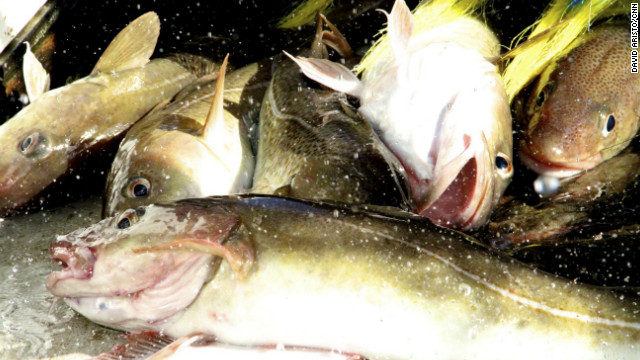 Bottom-dwelling fish such as cod could be affected most as oxygen levels decline in the oceans.
October 3rd, 2012
09:06 AM ET

Researchers: World's fish to get smaller as oceans warm

Be prepared for smaller fish.

That's the warning from researchers at the University of British Columbia, who say that we could see the maximum body weight of fish shrink by as much as 20% by the middle of the century, according to a study published in the journal Nature Climate Change.

They blame global warming, which is heating up the world's oceans. Warm water holds less oxygen than cold water.

“A warmer and less-oxygenated ocean, as predicted under climate change, would make it more difficult for bigger fish to get enough oxygen, which means they will stop growing sooner,” Daniel Pauly, lead investigator in the University of British Columbia's Sea Around Us Project and co-author of the study, said in a statement.

The researchers looked at more than 600 species of fish around the world and used computer modeling to determine how the lower availability of oxygen would affect them. More than 75% of the species are expected to see a loss in size.

The models showed the greatest decrease in average size would be in the Indian Ocean, 24%. The Atlantic could see fish sizes fall by 20% and the Pacific by 14%.

Across all oceans, tropical regions are expected to see a decrease in fish size of 20%, the report said.

Among individual species, the biggest reductions in size can be expected in the Pacific, the researchers reported.

Because oxygen levels decrease at depth in the oceans, the size decrease is expected to affect fish that live at lower depths more. Those include popular species for human consumption, including cod, haddock, whiting and halibut.

The researchers also said that populations of bigger species of fish could be expected to migrate toward the poles in search of colder waters with more oxygen.

When coupled with the effects of humans on the oceans, such as overfishing and pollution, the researchers said the world could see a reduction in its protein supply.

“We were surprised to see such a large decrease in fish size,” William Cheung, an assistant professor at the university and the study's lead author, said in a statement.

"The unexpectedly big effect that climate change could have on body size suggests that we may be missing a big piece of the puzzle of understanding climate change effects in the ocean,” Cheung said.

Scientists: To save reef, kill starfish

Why we should farm the ocean